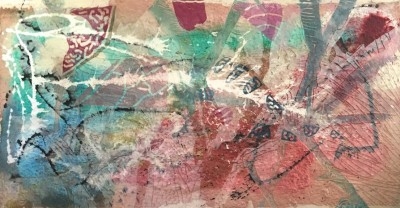 Gilliam came to Washington, D.C. in 1962 to join the second generation of Washington Color Painters. Like the first generation of the group, which included Morris Louis and Kenneth Noland, Gilliam has an interest in the qualities of color, applying acrylic to unprimed canvas.

From the mid-1960s, acrylics were poured over the canvases to create abstractions. Later canvases were without frames, and some canvases were even folded in 1968. Gilliam’s bold colors on draped canvases are sometimes displayed as environmental pieces or wall pieces. He has made collages as well as paintings.

He had a show at the Studio Museum in Harlem in 1982. It has been a time of transformation for the artist, a time when a direction that was implicit in his work for some time has found explicit expression. Gilliam’s paintings have always strained against their boundaries, their edges and their surfaces. Lately, they have exploded forcefully and effectively into three dimensions.

Gilliam’s present work has its origins in paintings he made in the early 1980′s. He was then literally raking huge quantities of acrylic paint and gel across a large canvas, then cutting the canvas into fairly regular geometric shapes; triangles and rectangles, wedges and arcs, and stitching the parts together in an improvisational way almost like a crazy quilt. While the resulting compositions were in fact quite flat, their colliding geometries and their vibrant colors made the surfaces seem to pulsate and jump.

Then Gilliam started to pun on this effect. He began attaching enameled aluminum elements to the edges of his paintings — actual three-dimensional forms that were small at first in simple geometric shapes, then larger and more complicated. For the most part, the surfaces of these projecting elements were smooth, making them — paradoxically — seem flatter than the painted surfaces to which they were attached.

In 1990 Gilliam had occasion to execute a number of actual sculptures; some of them against a wall, as in the Davis Square Subway Station in Boston, some of them suspended in space, like the Library of the University of Louisville. Using the same geometric shapes as in the paintings and combining them in the same way, Gilliam brought these sculptures to the brink of chaos by building them out dramatically into space, using color sometimes poured onto the surface to intensify the three-dimensional effect.

Gilliam’s 1990s works marry the sculpture to the painting. They combine shaped canvases, no longer quilted, but still patterned with raked masses of acrylic and gel, with cut-out aluminum elements, circles, broken circles, and perforated cones that seem to float in front of them. These projected elements are now heavily painted and textured, bearing the same raked surfaces and the same lush colors as the canvas behind them. The sculptural elements are thereby brought under some measure of control, and made to cohere with the painted surface. They are also dispersed across the painting rather than clustered at the edge or in the center as in many of Gilliam’s previous works. This reinforces the coherence Gilliam achieves through chromatic and textural consistency.

Thus much has changed in Gilliam’s work; but much has stayed the same. Within a somewhat more controlled idiom, his paintings still achieve that tense equilibrium between the regularizing influence of geometry and the explosive power of color and texture. There is something in Gilliam that loves a struggle and, here, as often in the best of his work, it lies in the effort to reconcile a cool intellectual structure with a richly expressive manipulation of paint.

Gilliam received a Guggenheim Fellowship and the Norman Walt Harris Prize from the Art Institute of Chicago. His work is in the collections of the Museum of African Art and the Corcoran Gallery in Washington, D.C. He has exhibited at the Museum of Modern Art, New York City and Walker Art Center, Minneapolis, Minnesota.