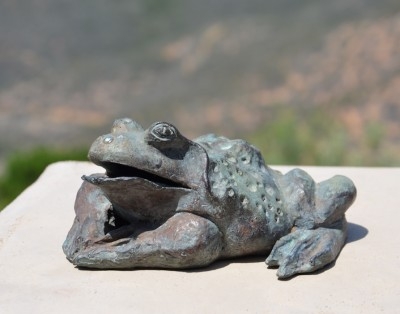 Ruth Asawa has combined artistic creativity with involvement in community and family life. She is the creator of major sculpture commissions including five large fountains in San Francisco. The woven wire sculptures of Ruth Asawa are in major collections such as the Whitney Museum. She is an art educator and was the inventor of a new sculptural medium, baker’s dough, which even kindergarten children can use.

Ruth Asawa has been a member of the San Francisco Art Commission, the Bart Art Council, The National Endowment for the Arts Education Panel and the California State Council. While creating her murals and major sculptures, Ruth Asawa is known for finding ways to involve not only other artists, but also school children in her projects.

The circumstances of her background were less than auspicious. Ruth Asawa was born in Southern California of Japanese-American parents. They were small farmers who worked long hours and barely made a living during the Depression. From a very early age Ruth Asawa liked to draw and wanted to be an artist an ambition that everyone but her Zen Buddhist parents discouraged as impractical. When World War II came, the family was uprooted and interned in a camp in Arkansas.

In the camp were several Japanese artists who had worked at Disney Studios. With lots of time on their hands, they taught drawing all day and into the night, and so Ruth Asawa received a unique art education when she was still of high school age. After finishing high school, she was permitted to leave the internment camp to attend Milwaukee State Teachers’ College in Wisconsin where she obtained a teaching credential in art. But after three years of study, Ruth Asawa was told that school districts refused to hire her because she was Japanese and the United States was still at war with Japan.

As a result, Ruth Asawa abandoned the idea of teaching and decided to study art at Black Mountain College in North Carolina, under such inspiring teachers as Josef and Anni Albers and Buckminster Fuller. Her later interest in pure structural form may be attributed to the Bauhaus influence of her three years with these teachers. At Black Mountain, Ruth Asawa met Albert Lanier, an architect, and married him in 1949. She left Black Mountain after her marriage and has lived and worked in San Francisco ever since. The couple have six children.

In the 1950′s, Ruth Asawa achieved recognition for her woven wire sculptures, airy constructivist forms that resemble dandelions, and other forms in nature that are often suspended, casting beautiful filigree shadows on the wall behind them. These tubular knit, or mesh, works were pioneering efforts by Ruth Asawa, ahead of the present wave of woven forms. This type of sculpture was acclaimed when it was exhibited at the Whitney Museum (1958), the Museum of Modern Art (1959), at New York’s Peridot Gallery (1954, 1956, 1958) and at the San Francisco Museum of Art.

The involvement by Ruth Asawa in the San Francisco community and the State of California, from which she had been forcibly expatriated eighteen years before, was total and enthusiastic. The Mermaid Fountain (1968) by Ruth Asawa is the focal point of the city’s Ghirardelli Square, and her giant, round cityscape-in-bronze created in 1973 encases the fountain in front of the Hyatt Regency Hotel on Union Square. Ruth Asawa sculpted it with the help of artist friends, relatives (her mother and daughter) and school children. It shows the key attractions of the city in imaginative fantasy reliefs. The newest fountain by Ruth Asawa in Japan Town is based on forms of Japanese origami (paper folding).

When the San Francisco Museum of Art held a Ruth Asawa retrospective in 1973, she introduced the idea of a “dough-in”, and one thousand youngsters took up her invitation to do baker’s clay sculpture at the museum. In 1976, the San Francisco Art Commission bestowed on Ruth Asawa an honor award for her contribution to the city as artist, educator, and civic leader. Recently, with glass artist Bruce Sherman, she has created a glass-and-wire sculpture. Ruth Asawa is enthusiastic about collaborating and wants especially to work with graphic artists. “That’s the really exciting thing,” she has said, “collaborating… It is enriching for all of us.”