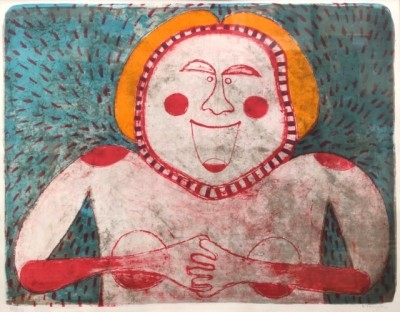 A native of Oaxaca in Southern Mexico, Rufino Tamayo’s father was a shoemaker, and his mother a seamstress. Some accounts state that he was descended from Zapotec Indians, but he was actually ‘mestizo’ – of mixed indigenous/European ancestry. (Santa Barbara Museum of Art). He began painting at age 11. Orphaned at the age of 12, Tamayo moved to Mexico City, where he was raised by his maternal aunt who owned a wholesale fruit business.

In 1917, he entered the San Carlos Academy of Fine Arts, but left soon after to pursue independent study. Four years later, Tamayo was appointed the head designer of the department of ethnographic drawings at the National Museum of Archaeology in Mexico City. There he was surrounded by pre-Colombian objects, an aesthetic inspiration that would play a pivotal role in his life. In his own work, Tamayo integrated the forms and tones of pre-Columbian ceramics into his early still lives and portraits of Mexican men and women.

In the early 1920s he also taught art classes in Mexico City’s public schools. Despite his involvement in Mexican history, he did not subscribe to the idea of art as nationalistic propaganda. Modern Mexican art at that time was dominated by ‘The Three Great Ones’ : Diego Rivera, Jose Clemente Orozco, and David Alfaro Siqueros, but Tamayo began to be noted as someone ‘new’ and different’ for his blending of the aesthetics of post Revolutionary Mexico with the vanguard artists of Europe and the United States.

After the Mexican Revolution, he focused on creating his own identity in his work, expressing what he thought was the traditional Mexico, and refusing to follow the political trends of his contemporary artists. This caused some to see him as a ‘traitor’ to the political cause, and he felt it difficult to freely express himself in his art. As a result, he decided to leave Mexico in 1926 and move to New York, along with his friend, the composer Carlos Chavez. The first exhibition of Tamayo’s work in the United States was held at the Weyhe Gallery, New York, in that same year. The show was successful, and Tamayo was praised for his ‘authentic’ status as a Mexican of ‘indigenous heritage’, and for his internationally appealing Modernist aesthetic. (Santa Barbara Museum of Art).

Throughout the late thirties and early forties New York’s Valentine Gallery gave him shows. For nine years, beginning in 1938, he taught at the Dalton School in New York.

In 1929, some health problems led him to return to Mexico for treatment. While there he took a series of teaching jobs. During this period he became romantically involved with the artist Maria Izquierdo, with whom he lived and worked for several years. In 1933 he completed his first successful mural commission, a series of wall paintings for the Escuela Nacional de Musica (National School of Music). While working on this project, he met Olga Flores Rivas, a piano student at the school. Soon he separated from Izquierdo, and began a romance with Olga. The two were married in 1934. Although Olga was talented and had a budding performance career, she abandoned her musical pursuits to devote herself to promoting Tamayo’s work. She was a lifelong muse to the artist, and over his seventy year career, he drew and painted many portraits of her.

They moved to New York in 1937, and he began to exhibit his work internationally. From 1937 to 1949, Tamayo and Olga lived there, and he became widely recognized for his signature form of abstract figuration. Some of his most valuable works were created during that time.

In 1943 Tamayo painted his first mural in the United States at the Hillyer Art Library at Smith College. Vogue magazine’s 1946 issue referred to him as ‘the best of young painters’. Look magazine also named him ‘a fixed star in the New York art world’. (Santa Barbara Museum of Art) He was an elegant and media-savvy man, often photographed in his Upper East Side studio, with its wall of windows facing out onto Manhattan’s fashionable townhouses.

The 1940s were however not without problems for the couple. Olga suffered from health problems, leading to several miscarriages, and the marriage was strained. Tamayo dedicated his work to her by adding an extra ‘O’ to his signature.

His fame was growing in Mexico. In 1948 his first major retrospective was held at the Palacio de Bellas Artes in Mexico City, and while he was still controversial, his popularity was high. He enjoyed broad commercial and critical success, but remained uncomfortable with the political differences and controversy, and so Tamayo and Olga moved to Paris in 1949. There he was welcomed by the artists and intellectuals of Europe. The French government named him Chevalier and Officier de la Légion d’Honneur in 1956 and 1969, respectively, and he was the recipient of numerous other honors and awards. Tamayo was among the first Mexican artists to be included in the Venice Biennale. He remained in Paris for 10 years, after which the couple returned permanently to Mexico.

His work was exhibited internationally in group and solo shows. Important Tamayo retrospectives took place at the São Paulo Bienal in 1977 and the Solomon R. Guggenheim Museum, New York, in 1979.

From 1933 to 1980, Tamayo painted 21 murals for an array of universities, libraries, museums, civic and corporate clients, hotels and an ocean liner. He was also an influential printmaker, and, in the latter part of his life embarked on the creation of sculpture. Tamayo eschewed the highly politicized themes explored within the works of his peers, and favored lyrical imagery and incorporated elements of Cubism, Surrealism and Expressionism. Mexican folklore and his Indian origins provided a constant source of inspiration for him.

Through his 70s and 80s he continued to be a prolific artist, teacher, and collector. Critics have extolled his bold and saturated use of color as his most significant contribution to Modern art. He was elected an honorary member of the American Academy and National Institute of Arts and Letters in 1961.

Rufino and Olga Tamayo donated the Museum of Pre-Hispanic Mexican Art to their native State of Oaxaca in 1974. Their personal holdings of more than 1,000 pieces of ceramics and sculpture formed the cornerstone of the collection. The Rufino Tamayo Museum of International Contemporary Art opened in Mexico in 1981, and it displays many of the artist’s works, as well as paintings, sculpture and drawings from his private collection. At the time, it was the first major museum not run by the Government.

An interesting sidelight regarding Tamayo’s work has to do with a theft. Tamayo’s 1970 painting ‘Tres Personajes’ was bought by a Texan as a gift for his wife in 1977, then stolen from their storage locker during a move in 1987. In 2003, a woman, Elizabeth Gibson, found the painting in the trash on a New York City curb. She knew little about modern art, but felt the painting “had power” and took it without knowing its origin or market value. She spent four years trying to learn about the work, eventually learning it had been featured on an episode of Antiques Roadshow. Ultimately, Gibson and the former owner arranged to sell the painting at a Sotheby’s auction. In November, 2007 Gibson received a $15,000 reward plus a portion of the $1,049,000 auction sales price.

Tamayo painted his last painting in 1989, at the age of 90, ‘Hombre Con Flor’ (Man withFlower), a self-portrait. Rufino Tamayo died in 1991 at the age of 92 in Mexico City. Olga passed away two and a half years later.

Credit for the above information is given to: artisticgallery.com; wikipedia.org; guggenheimcollection.org; Santa Barbara Museum of Art. 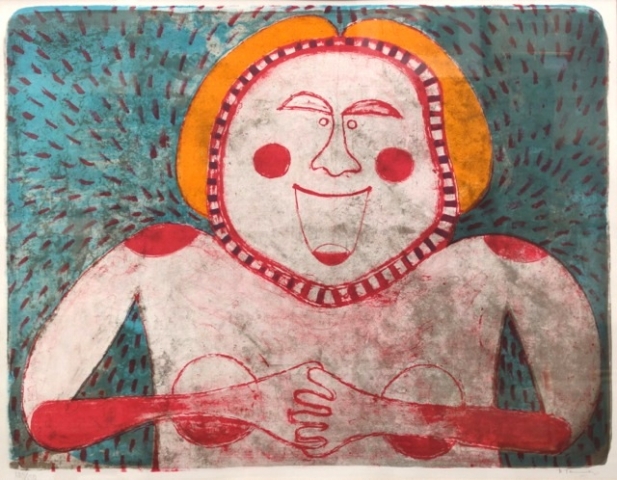