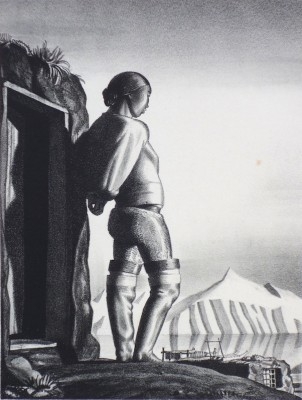 Growing up in a genteel family in New York City, Rockwell Kent was a member of the rugged realist school of landscape painters as well as a popular illustrator and printmaker. His 1930 illustrations for Moby Dick are among his most lasting achievements. He was the first American artist to have work exhibited in the Soviet Union, a reflection of his Communist Party sympathies, which earned him the Lenin Peace Prize in 1967. This espousal of radical politics caused his career to suffer badly in the ’50s because his leftist views caused him disdain among many Americans. However, his work, reflecting both realism and modernism, has earned increasing attention from American art historians.

His subject matter is wide-ranging including scenes of Maine’s Monhegan Island, the Adirondack Mountains, book illustrations, and commercial art renderings for companies including General Electric, Rolls Royce, and Westinghouse. Although his first love was painting, in addition to illustration, he also did fabric, ceramic, and jewelry designs, and spent time as a dairy farmer, carpenter, home builder, and lobster fisherman.

His father, Rockwell Kent, Sr. was a partner in a prominent New York City law firm and an entrepreneur in Central American mining investments. His mother, Sara Ann Holgate, was the niece and surrogate daughter of James and Josephine Banker, one of New York’s first-millionaire families. Young Rockwell’s early childhood was divided between Hudson River Valley, Long Island, and New York City homes, each brimming with cultured surroundings and distinguished persons. However, that comfortable life came to an abrupt end in 1887 with the death from typhoid fever of Rockwell Kent, Sr., which left the mother with Rockwell Jr., age 5, and another son, and a daughter who was born shortly after the father’s death.

Now in a readjusted circumstance of genteel poverty, Kent was encouraged in his art talent by an aunt, Josie Banker who was a successful ceramic decorator and with whom he traveled in Europe. He studied mechanical drawing and woodworking at the Horace Mann School in New York, and this experience gave him a life-long respect for craftsmanship that is evident in his paintings and drawings.

It was also during these years that he developed his understanding of discrepancies between social classes. He later recalled: “When I was a young fellow, I was very much disturbed by seeing some people with lots of money and lots of people with no money” (Smithsonian, 8/2000 by Scott Ferris).

From 1900-1903, he joined William Merritt Chase’s classes at Shinnecock and then entered the New York School of Art studying with Robert Henri and becoming close friends with George Bellows and Edward Hopper. His special mentor, however, was Abbott Thayer with whom he painted in New Hampshire and whose home was a place of wide-ranging discussion about topics including German lieder and Nordic sagas. All of this encouraged Kent to travel extensively. Later Kent married Kathleen Whiting, the niece of Thayer, and they had five children. In 1919, after returning from his Alaskan adventure, Kent decided to move his family out of New York City. Searching for a farm they could afford, Kent and Kathleen, found an isolated property high on the southern spur of Mt. Equinox, near Arlington, Vermont. It was called Egypt Farm. But Vermont was not the Eden-like existence he had envisioned and his infidelities and long absences eventually led to divorce. He was married two other times.

He was an inveterate traveler whose wanderlust created subjects from a wide variety of locations and which caused him to be literally the starving artist, dependent upon outside sources for money. One of his supporters was Duncan Phillips, founder of the Phillips Collection in Washington D.C. who for nine years gave Kent $300. a month in exchange for first selection of two paintings a year.

Much influenced in Ireland by Thayer, Kent’s artistic focus became landscape painting and the relationship between nature and humanity. He spent much time on Monhegan Island in Maine, a place he first visited in 1905 at the suggestion of Robert Henri. Although Kent stayed only until 1910, the place became closely associated with his name. Between 1915 and 1935, he visited Newfoundland, Alaska, Tierro del Fuego, France, Ireland, and Greenland. He also wrote designed, and illustrated a number of travelogues.

In 1927, after his marriage to Frances Lee, he settled into a parcel of farmland near Ausable Forks, New York, where he built a studio and felt at home for the first time during his painting career. There he and his wife hosted numerous gatherings of prominent New York people including the Pulitzers, Putnams, and Paul Robeson, Pete Seeger, and John Dos Passos.

In 1907, his first exhibition was held in New York, and he also exhibited with George Bellows and John Steuart Curry and members of The Eight before 1920. From 1918, he did numerous wood engravings and lithographs, and he left eighty-six paintings and hundreds of drawings, now scattered among museums. In Fall, 1998, the Monhegan Museum held a retrospective of his oil and ink paintings.