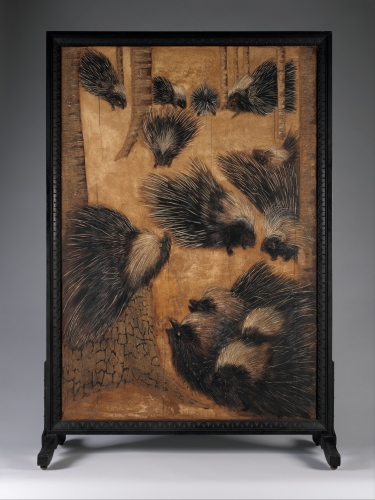 Born in New York City, Robert Chanler, a designer and muralist, received much of his art training in France at the Ecole des Beaux-Arts, and there his most famous work, Giraffes, was completed in 1905 and later purchased by the French Government.

Chanler specialized in painted screens and was a member of the National Society of Mural Painters. A ceiling mural of buffaloes is in the Coe House in Brookville, New York. He was also a member of the New York Architectural League.

At the 1913 Armory Show, he exhibited a painted screen titled Hopi Snake Dance, which was used at the Show at the transition area–to ease the shock– to the Fauves part of the exhibition. Chanler’s screens were whimsical with swans and leopards in black, white and silver, and his style was regarded as modern but not extreme.

Of his ‘in-between’ position at the Armory Show, it was written that “. . .the public found that half-way station more comfortable than the uncompromising radicalism of the Fauves and Cubists. The colorful decorative screens of Chanler won instant popularity although only one of them sold.” (Brown, 135)

A description of Chanler in New York was written by artist Frances Cranmer Greenman in her autobiography, Higher Than The Sky. She knew him as the brother of William Astor Chanler, an eccentric who hunted big game and wrote essays on the Bible. Greenman wrote that Robert Chanler, “also an eccentric, divided his time between painting portraits, exotic murals and screens—wine, women and song.” (161) His studio in Harlam was “across the top of his two houses and was outfitted with a battery of lights for night painting. He liked to paint at night. Around midnight his Filipino servant would lay out the paints and potables—and the guests standing knee-deep in Scotch would watch him do a portrait. ‘Sheriff Bob,’ the admiring art colony at Woodstock called him. He was a lion of a man, with bottled-in-bond corpuscles and blood 180 proof. Square of jaw and bridge of nose.” (169)

He was a descendant of Colonial politicians including Governor Winthrop of Massachusetts and Peter Stuyvesant, last Dutch governor of New York. He had an early dedication to politics but changed to art.

Sources include:
Peggy and Harold Samuels, The Illustrated Encyclopedia of Artists of the American West
Peter Hastings Falk, Editor, Who Was Who in American Art
Florence Cranmer Greenman, Higher Than the Sky
Milton Brown, The Story of the Armory Show