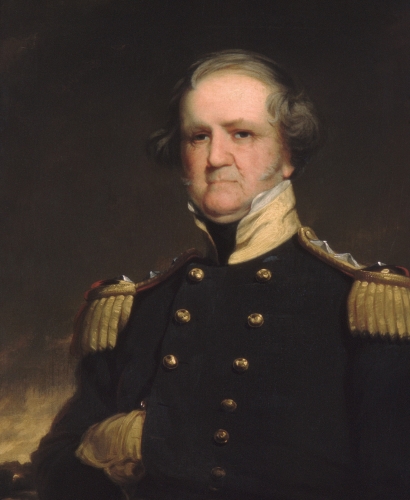 Born in New York City, Robert Weir became more recognized for his teaching of art than his own paintings. As a youngster, he was befriended by painter John Wesley Jarvis and also received instruction from Robert Cooke, an English heraldic artist. When he was a teenager, Weir’s painting was so remarkable that his canvases sold in New York as the work of the Old Masters.

From 1824 to 1827, he studied in Italy and in 1825 he worked with Pietro Benvenuti in Florence. Later he moved to Rome, where he lived with Horatio Greenough.

Returning to New York he set up his own studio. In 1834, he began a 42-year teaching career at the U.S. Military Academy at West Point, and his pupils included Ulysses S. Grant, Robert E Lee, and James Whistler as well as his own sons, John Ferguson and Julian Alden Weir.

He painted subjects from the novels of James Fennimore Cooper and Washington Irving as well as portraits and historical topics. In the mid-1930s, he painted his large Embarkation of the Pilgrims from Delft Haven, in Holland, which was installed in the Rotunda of the U.S. Capitol Building in 1843.

During the half century that Weir was most active in religious painting, other American artists showed little interest in painting religious subjects. Consequently, few paintings of the nature were exhibited at the American Academy of Fine Arts, the American Art-Union, or the National Academy of Design.

Weir is believed to have been a “leading practitioner of the religious genre in America during the years 1830 to 1880, when Biblical subjects were unpopular with both artists and patrons.

“Weir was essentially an academic painter who continually attempted to associate himself with the European artistic traditions from the Renaissance to his own time, as his religious paintings demonstrate.”