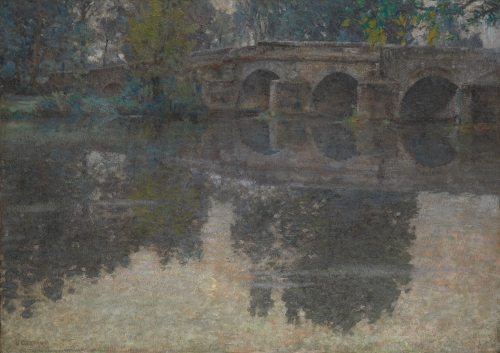 Robert Vonnoh was one of the first American artists to bring European Impressionism to the United States. A celebrated Impressionist landscape and portrait painter and a gifted and respected teacher, Vonnoh influenced many American artists. His students included William Glackens, Robert Henri and John Sloan, who would later form influential the Ashcan school.

Although Vonnoh was born in Hartford, Connecticut in 1858, he moved to the Boston area with his German-American parents as a youth and began his artistic studies there. He attended the public schools, trained in a lithography shop, and eventually enrolled in the Massachusetts Normal Art School, where he was a pupil under George H. Bartlett and met Edmund Tarbell. After graduation in 1879, Vonnoh began his long and illustrious teaching career, first at his alma mater, then at the Roxbury Evening Drawing School and the Thayer Academy in South Braintree. He also taught at the East Boston Evening Drawing School, the Cowles Art School, the School of the Museum of Fine Arts in Boston, and the Pennsylvania Academy of the Fine Arts in Philadelphia.

Throughout his career, Vonnoh traveled frequently between America and France. In 1881, Vonnoh made the first of many trips to France. He enrolled in the Académie Julian and was a student under Gustave Boulanger and Jules-Joseph Lefebvre. He frequented the Louvre and had his paintings accepted into the prestigious Paris Salon. During this period in Paris, the French Impressionists were exhibiting their work at the Georges Petit Galleries and at Durand-Ruel, but it is not known if Vonnoh saw these exhibitions. After two years, he returned to his teaching career in Boston in 1883. Between 1883 and 1886, Vonnoh was quite active in the artistic circles of Boston, He saw the two great shows of European Impressionist art in the United States—the “Foreign Exhibition” held at the Mechanics Building in Boston in 1883 and the exhibition of French Impressionist art in New York in 1886, which was organized by the American Art Association and lent by Durand-Ruel. Shortly after his marriage to his first wife Grace D. Farrell he return to live and work in France again between 1887 and 1890.

Soon after his arrival in France, Vonnoh settled in the area of Grèz-sur-Loing near the Forest of Fontainebleau. He began exploring in earnest this revolutionary technique of impressionism and mastered it quite quickly. His adoption of the impressionist aesthetic has been attributed to the influence of Irish painter Roderic O’Conor, who had immersed himself in impressionism and who may have been in Grez during this period. Between 1887 and 1890, Vonnoh fully adopted the vanguard art of the impressionists, but like most Americans he never went as far as his French counterparts in dissolving forms into pure light and color. Many of the paintings he created during this time were accepted into the Paris Salon, others were sent to Philadelphia for a one-person show at the Pennsylvania Academy of the Fine Arts in 1889. In 1891, Vonnoh returned to the United States and assumed the position of principal instructor in portrait and landscape painting at the Pennsylvania Academy of the Fine Arts, which he held through 1894. He also remarried, after his first wife’s death, to American sculptor Bessie O. Potter in 1899.

During his years in America, between 1891 and 1907 and again from 1912 to 1920, Vonnoh was considered one of the foremost landscape and portrait painters in the country. Around 1905, the Vonnohs discovered the artists’ colony at Old Lyme, Connecticut, Vonnoh spent many summers there over the next twenty-five years and exhibited regularly at the Lyme Art Association exhibitions. After 1925 Vonnoh’s eyesight began to deteriorate, bringing an end to his highly productive career. He returned to Grèz-sur-Loing, France and died of a heart attack in Nice in 1933.