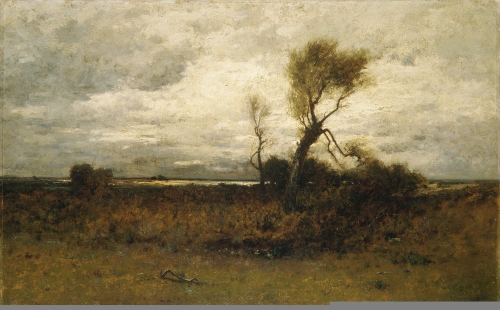 One of America’s prominent landscape and marine painters as well as teachers in the late 19th century, Robert Swain Gifford worked primarily in New York City with travels to many other locations. He was also one of the early artists into Alaska, going there in 1899 as a commissioned landscape painter for the Harriman Expedition, which traveled up the coast of Alaska as far as Plover Bay in Siberia.

He was born on a small island called Nonamesset, which adjoins Naushon in the chain of Elizabeth Islands off the coast of southeastern Massachusetts. When Gifford was two years old, his family moved to Fairhaven where his father was employed as a boatman and fisherman.

Two famous New Bedford artists, Albert Van Beest and William Bradford, worked on the Fairhaven waterfront, and as a teen-ager, Gifford had the good fortune to become the friend and student of Van Beest, whom he took on occasional sketching trips in his father’s boat. Gifford followed Van Beest to New York and stayed with him there for a short time.

Gifford then returned to New Bedford, Connecticut in the late 1850s, where he lived with his friend the sculptor, Walton Ricketson, who, in turn, introduced him to the Adirondack Mountains, providing subjects for many paintings, and to Grand Manan Island, subject for more paintings.

In 1864 Gifford’s career began when he opened a studio in Boston, where his early works were mainly marine paintings. In 1865, he moved to New York City and spent the winter painting in Samuel Coleman’s studio in the Dodsworth Building. He left the city for the summer and returned to New Bedford and the area islands to make sketches for work to be done the next winter in his studio.

During the 1860s he traveled extensively in search of interesting landscapes, and the western United States became a favorite painting area, especially California and Oregon.

Gifford was a founding member of the American Society of Painters in Watercolors, and in 1867, was elected an associate of the National Academy of Design.

He also supported himself by doing book illustrations for three articles in Picturesque America, a forty-eight-part serial edited by William Cullen Bryant and published by D. Appleton & Company in 1872.

In August 1870 Gifford traveled with his friend Louis Comfort Tiffany to Europe and Africa. This trip offered new subjects for Gifford’s work; Egypt in particular was one of his favorite themes, and he became well known for his oriental life scenes.

In 1873 he married Francis Eliot, the daughter of Thomas Dawes Eliot, a lawyer and congressman from New Bedford. The next year they went to Europe and eventually their travels led them to North Africa. They enjoyed this region very much and both painted, recorded local customs, and collected local artifacts.

In 1875 the Giffords returned to New York and joined the mainstream of American artists. Gifford won a metal of honor at the Centennial Exposition in Philadelphia and in 1876 and was one of the founders of the American Art Association. He became one of the first artists in the country to employ etching as a technique and he helped establish the New York Etching Club. He also became a member of the Royal Society of Painter-Etchers of London.

In October, 1877, Gifford accepted a position as a teacher of painting in the Cooper Union schools, where he taught from 1877 to 1896, eventually becoming head of the Woman’s Art School in 1896 and then director of all the art schools from 1903 until his death.

He was appointed a member of the Advisory Committee on Fine Arts of the state of New York for the World’s Columbian Exposition and was named a judge on the awards committee of the St. Louis World’s Fair.

In 1886, Gifford built for his family a large home in Nonquitt in South Dartmouth. From then on the Giffords spent their summers at Nonquitt and their winters in New York. Gifford was a fine sailor who designed his own boats and enjoyed challenging his friends to match races on Buzzards Bay.

Gifford died at his home in New York after a brief illness at the age of sixty-five.