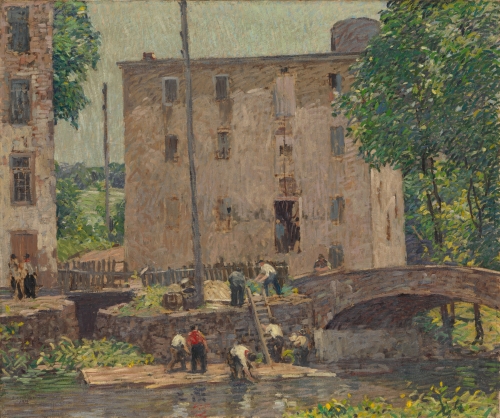 Robert Spencer was born in 1879 in Nebraska, the son of a Swedenborgian minister. After studying medicine briefly, he decided to become an artist and moved to New York City, where he enrolled at the National Academy of Design. Later he studied with William Merritt Chase and Robert Henri at the New York School of Art. He moved to New Hope, Bucks County in 1906, and studied privately with the well-known Bucks County painter Daniel Garber. It was at the home of painter William L. Lathrop that Spencer met his future wife, Margaret Fulton, herself an accomplished architect.

For the next 25 years Spencer lived and worked in Bucks County, becoming one of the most prominent members of the Pennsylvania Impressionist art colony. He suffered several nervous breakdowns in the 1920s, and in 1931 took his own life.

Spencer became one of the most visible artists in the New York art world in the teens. His first success came in 1914, when the Metropolitan Museum of Art purchased one of his major early canvases, “Repairing the Bridge”. The celebrated collector Duncan Phillips then took an interest in Spencer’s work, eventually purchasing eight of Spencer’s canvases, currently housed in the Phillips Collection in Washington, DC.

The two men became friends, and Phillips appointed Spencer to the Committee on Scope and Plan of the new gallery then being created by Phillips. After Spencer’s death, Phillips praised Spencer as “a rebel always against the standardized and stereotyped in art.” Phillips believed that “there [was] no other painter, not John Sloan or Edward Hopper, more pungently American in expression.” Spencer also has work in the collections of the Brooklyn Museum, the Carnegie Institute, the Corcoran Gallery of Art, and the Detroit Institute of the Arts. In 1915, he won a gold medal at the prestigious Panama-Pacific International Exposition in San Francisco.

Stylistically, Spencer differed radically from most of his Pennsylvania Impressionist colleagues. Probably influenced by Henri and the Ashcan School, Spencer made his reputation with skillful, evocative renderings of the everyday life of his community, often depicting the mills, tenements, and factories of New Hope and surrounding areas. “A landscape without a building or a figure, ” he said, ” is a very lonely picture to me.”

Later Spencer painted more fanciful European scenes, many of which he did from his imagination, since he did not actually travel to Europe until 1925. Spencer’s painting “Mountebanks and Thieves” won a prize at the 1926 Carnegie International Exhibition in Pittsburgh, and juror Pierre Bonnard said, “Mr. Spencer . . . is in the full vigor of his talent which is great. His art does not resemble European art, a rare fact in America.”