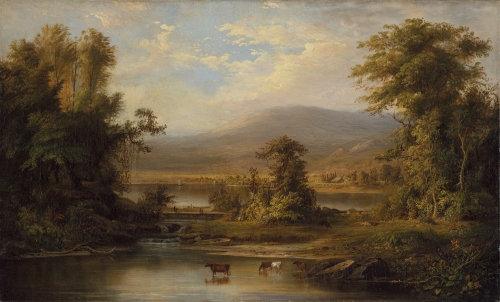 Landscape with Cows Watering in a Stream, 1871

Although Hudson River style landscape painting is most associated with Robert Duncanson, his floral still lifes first brought him recognition. He is also thought to be the first black painter and muralist in America to earn his living by painting and to become internationally known.

He was born in New York State in 1821 and because of racial prejudice, his father took him to Canada to be educated in a more tolerant atmosphere. As an artist, he was largely self-taught and studied reproductions of the Hudson River School painters. In 1841, he joined his mother in Cincinnati, Ohio, and shortly after began exhibiting there.

Nicholas Longworth, a prominent citizen, supported his work and commissioned him to paint murals in his residence, now the Taft Museum. These eight murals were large-scale landscapes with elaborate frames and were covered with wall paper by subsequent owners. However, the daughter of these owners and her husband, Anna Sinton and Charles Taft, gave them to the city of Cincinnati, and Cincinnati Art Museum Director, Walter Siple had them restored.

Duncanson traveled widely from Cincinnati, doing numerous landscapes and also some daguerreotypes. In 1853, he went to Europe and then returned to paint classical motifs into his landscapes, obviously influenced by his exposure in Europe to Neo-Classicism. During the Civil War, he was in England and Scotland.

In 1872 he suffered a mental breakdown and died shortly after in Detroit, Michigan.