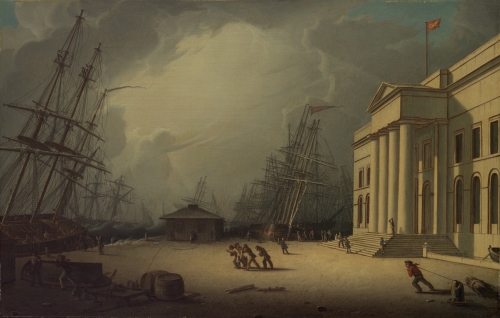 The Custom House at Greenock, Scotland, 1828

Born in Whitehaven, Cumberland, England, Robert Salmon became a marine painter inspired from living in port towns of Maryport and Whitehaven and being around ships and the sea. He also spent much time in Liverpool and in the ship-building town of Greenock on the west coast of Scotland.

In 1828, for unknown reasons, he came to America on the packet ship, “New York” and for thirteen years maintained a studio on Marine Railway Wharf at the bottom of Hanover Street. An eccentric, he lived in a small hut among the wharves of the Boston Harbor. He was enormously popular, and his work reflecting the years when the Harbor was booming with growth, was highly sought after by collectors including prominent Bostonians Samuel Cabot, Robert Forbes, and J.P. Cushing.

His paintings of that period number between three and four hundred and reflect 17th Century Dutch genre painting, peopled with tiny figures as well as the atmospheric qualities of Dutch marine tradition. He is credited as the founder of American Luminism and was highly influential on artists including Fitz Hugh Lane and William Bradford. A.T. Bricher, James Hamilton and William Haseltine.