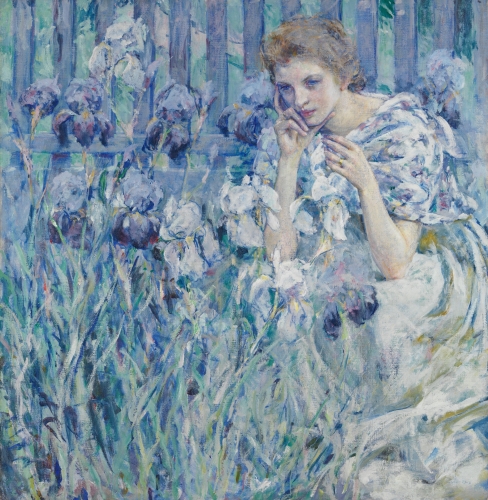 American impressionist Robert Reid was born in Stockbridge, Massachusetts in 1862. He studied at the Boston Museum of Fine Arts School, the Art Students League in New York, and at the Academie Julian, in Paris, with Gustave Boulanger and Jules Lefebvre. Reid exhibited at the Paris Salon, the 1893 Columbian Expo in Chicago, the Paris Expo, the Pan-American Expo, and the St. Louis Expo, winning prizes and medals.

A painter of landscape, figures, still-lifes and murals, Reid was in 1897 one of the founding members of the Ten American Painters, a group of Impressionists who rebelled against traditionalism. He had spent many of his summers painting in Normandy while studying in France in the late 1880s. He returned to New York in 1889 and in 1892, received the commission to decorate one of the eight entrance pavilion domes in the Liberal Arts Building for the 1893 World’s Columbian Exhibition in Chicago. Following this period, he received throughout his career important mural commissions in New York including ones for the Fifth Avenue Hotel and the Imperial Hotel. He also continued his easel work.

Reid’s painting, “Woman with a Vase of Irises,” c. 1906, typifies his Impressionist style with his handling of high-hues, values and little contrast of lights and darks. This painting is also typical of his subject matter, which was idealized young women sitting in landscapes and holding or carrying flowers. In this painting, a young woman with a wistful expression, dressed in a voluminous, loose-fitting white house dress, sits on a porch railing, her hands on a large foreground vase of flowers. Loosely painted Impressionist foliage fills the entire background closely behind her.

About 1910, he began a group of paintings showing women dressed in Japanese kimonos set in brilliantly colored interiors with Oriental screens.

In the early 1920s, Reid moved to Colorado Springs where he joined the faculty of the Broadmoor Academy. During this time, he focused more on portrait commissions, “creating what he called ‘portrait impressions’ by quickly painting in only the essential forms and features in broad, vigorous brush strokes.” (Falk)

In 1927, Reid was partially paralyzed by a stroke and spent the last two years of his life in a New York State sanitorium where he learned to paint with his left hand.

His work is included in the permanent collections of many public institutions including the Detroit Institute of Arts. Reid was a member of the Society of American Artists and the National Academy of Design (Associate, 1902; Academician, 1906).

Sources include:
Peter Falk, “Who Was Who in American Art”