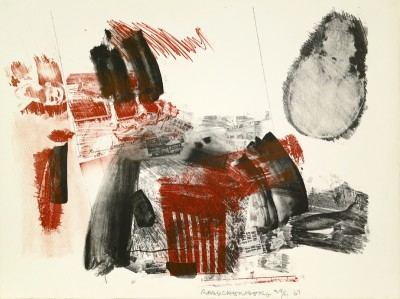 Born with the name Milton Rauschenberg in Port Arthur, Texas, Robert Rauschenberg became one of the major artists of his generation and is credited along with Jasper Johns of breaking the stronghold of Abstract Expressionism.

Robert Rauschenberg was known for assemblage, conceptualist methods, printmaking, and willingness to experiment with non-artistic materials–all innovations that anticipated later movements such as Pop Art, Conceptualism, and Minimalism.

In May, 1999, ARTNews magazine featured Robert Rauschenberg as one of the top twenty-five influential western artists stating: “His irreverent notions of what an artwork could be gained him the status of an enfant terrible. . .Rauschenberg pushed the viewer to accept the unexpected.”

Robert Rauschenberg has said that he believes painting should relate to both life and art and that he wants his artwork to be the intermediary between the two.

Robert Rauschenberg received much formal art education beginning with the Kansas City Art Institute in 1947 and 1948. Robert Rauschenberg studied briefly in Paris at the Academie Julian, and from 1948 to 1949 was at Black Mountain College in North Carolina with Josef and Anni Albers. This period was followed by several years attendance at the Art Students League in New York City with Morris Kantor and Vaclav Vytlacil. In 1951, Robert Rauschenberg exhibited all white and black paintings incorporating viewer participation through the shadows they cast on the works.

At Black Mountain College, Robert Rauschenberg had met composer, John Cage, and dancer- choreographer, Merce Cunningham, for whom he worked in his company as a designer, manager, and performer. Frequently he scoured the area in which they were performing for ‘unusual’ objects such as tires, old radios, and a stuffed goat, which he could use in the set designs. From 1953, Robert Rauschenberg also made designs for Paul Taylor’s dance company.

Robert Rauschenberg also pioneered electronics in art and collaborated with engineer Billy Kluver to create environmental works that manipulate light, shadow, and sound to interact with the viewer. Printmaking was another aspect of the career of the artist, and by the late 1950s, he was incorporating newsprint into his paintings. Robert Rauschenberg would use lighter fluid to rub newsprint onto canvases, making the news of that day part of the painting. Influenced by Andy Warhol, he did a series of Silkscreen Paintings between 1962 and 1964 to divert himself from the medium of collage, with which he was becoming bored.