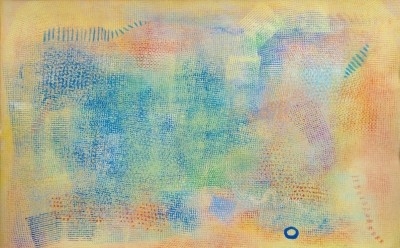 A painter of intensely colorful abstraction, Robert Natkin does work that often runs in series including Apollo Series of the 1960s. These works, with vertical stripes alternating between thick and thin, decorative and textured, are cheerful and light, invoking the lyricism of Apollo, the Greek god of poetry and light.

Other series are titled Steps and Grids, Field Mouse, and Intimate Lighting. His painting is inspired by the color used by Henri Matisse, and Pierre Bonnard, and the Cubism of Paul Klee.

Natkin was born in Chicago and graduated from the Art Institute of Chicago in 1952. He married painter Judith Dolnick, and they lived in Chicago where Natkin and a friend opened the Wells Street Gallery to give young Chicago artists a chance to market their artwork. The gallery operated from 1957 to 1959.

He was part of the Whitney Museum exhibit titled “Americans Under 35″, and during the late 1950s held one-man shows in Los Angeles, Boston, and Philadelphia.

Natkin taught at the Kalamazoo Institute of Arts.