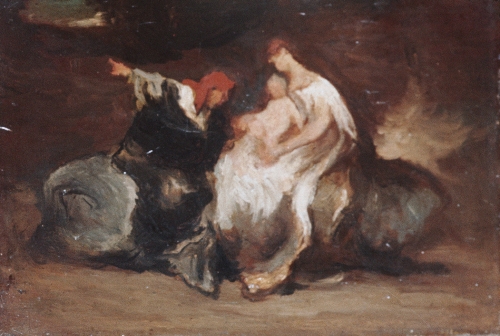 Painter Robert Loftin Newman, born in 1827 in Richmond, Virginia, grew up in Clarkesville, Tennessee. A painter of mood, he is sometimes associated with Albert Pinkham Ryder, with whose work he shared thematic and stylistic affinities, especially during the 1880s.

Although he read voraciously on art, he received no instruction, with the exception of five months spent with Thomas Couture in Paris in 1850. At that time, his predilection for color manifested itself in his great admiration for Titian. Newman made a second trip to Paris in 1854, resumed an acquaintance with William Morris Hunt, and was introduced to the Barbizon painters.

After serving with the Confederate forces during the Civil War, he probably lived in New York City until 1867, before moving, in 1872, to Nashville, Tennessee, where he tried to establish an academy of fine arts.

Once again in New York City in 1873 (where he stayed the remainder of his life, with the exception of trips abroad in 1882, 1908 and 1909), Newman designed stained glass for five years for Francis Lathrop. This brought him into contact with leading artists and cultural figures who helped support him, even though he rarely exhibited his work.

His subject matter was usually limited to children, mothers and children, and Old and New Testament themes (“Hagar,” Metropolitan Museum of Art, New York City; “Christ Saving Peter,” Brooklyn Museum). Usually dominating their murky landscape settings, his monumental, often vaguely sketched, figures were brought to life by accents of color rather than by their contours. Eugene Delacroix was an important source of subjects for Newman.

He did not receive public recognition until 1894 when a group of his friends organized a Newman exhibition at the Boston Museum of Fine Arts.

Source: Matthew Baigell, “Dictionary of American Artists”
Peter Falk, “Who Was Who in American Art”