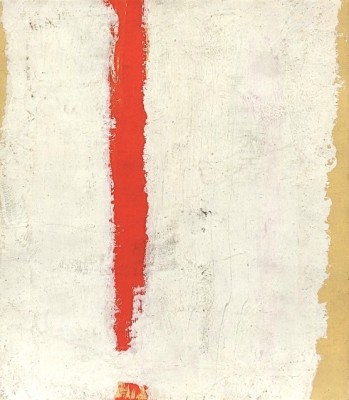 A painter known for delicate floral and fruit still life, Robert Kulicke was also a highly respected picture frame designer and jewelry maker, specializing in reviving the ancient art of cloisonné. “Widely knowledgeable in art history, he often supported himself and his businesses by buying and selling medieval art and Coptic textiles.” His signature picture frames were welded aluminum, wrap-around clear-Lucite plexiboxes and sectional frames that could be shipped and assembled. He also did reproductions of historical frames including for the Leonardi da Vinci portrait of Ginevra de’ Benci in the National Gallery of Art in Washington DC and for Epiphany by Giotto in the Metropolitan Museum of Art in New York City. He never patented his designs because of a lingering resentment of the closely held design formulas by American designers when he was trying to learn the trade. His welded aluminum frames resulted from him being consulted in 1956 by representatives of the Museum of Modern Art who wanted frames that could easily be shipped. Four years later, he created the Lucite frames for MOMA’s photography department.

Kulicke lived in Manhattan until the last eighteen months of his life. He was born in Philadelphia where his father and older brothers were design engineers. He studied art in high school and advertising design at the Philadelphia College of Art, and said he was self-schooled by reading “all the art books at the Philadelphia Library and studying the collections of the Philadelphia Museum of Art.”

During World War II, he served in the Army in the Pacific , and then went to Paris to study in the atelier of Fernand Leger on the G.I. Bill with his first wife, painter Barbara Boichick. In 1951, he opened Kulicke Frames in New York City and socialized with Abstract Expressionist painters including Robert Motherwell and Franz Kline. They encouraged him to design thin frames that would not distract from their paintings.

Although he supported himself financially with his framing business, he “considered painting his life’s work”, something he became serious about in 1957, although his first gallery show was in 1953 at the Allan Stone Gallery. His inspiration for small still lifes was his framing commission for 300 small bottle still life paintings by Giorgio Morandi. In 1970, he left the framing business to his wife from whom he was divorced and her father, and opened the Kulicke Cloisonné Workshop on Upper Broadway. Shortly after he and his companion, Jean Stark, founded the Kulicke-Stark Academy, which in 1984 was renamed the Jewelry Arts Institute.

At the time of his death, he was survived by a son and a daughter and his wife, Pam Sheehan.

Above from The New York Times obituary of the artist: By ROBERTA SMITH
“Robert Kulicke, 83, Artist and Frame Maker” – Published: December 15, 2007