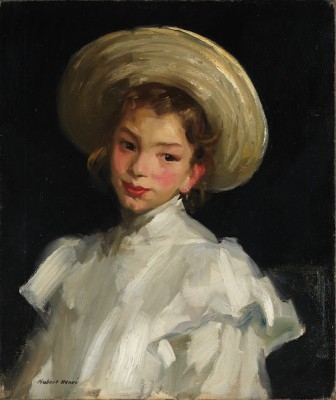 Born Robert Henry Cozad in Cincinnati, Ohio, Robert Henri became one of the leading personalities in American art, known for his teaching skills, ethnic portraits, especially spirited children, and insistence that artists should adhere to social realism and give rein to their own artistic instincts.

During his growing up years, he lived between Cincinnati and Cozad, Nebraska, founded by his father John Jackson Cozad, a gambler and real estate promoter. When Robert was about 10 years old, his family moved to Cozad in Dawson County. Tension existed between John Cozad and the established ranchers who resented development, and a rancher attacked Cozad, who in self defense shot the man to death.

Fearing for his life, he, his wife and two sons sneaked out of town and re convened in Atlantic City where they disguised their identity by taking other names. The father was later cleared of the charge, but he changed his name to Richard H. Lee, and passed his two sons off as adopted children named Frank Southern and Robert Henri. Robert chose a variation of his middle name to rhyme with “buckeye” to symbolize his Ohio roots. From Atlantic City, as a young man, he attended boarding school in New York City.

He, having shown early art talent, studied at the Pennsylvania Academy of Fine Arts as a student of Thomas Anschutz and Thomas Hovenden and was much influenced by the realism of Thomas Eakins, previous Director of the Academy. Eakins had been fired from this job for teaching nude drawing and anatomy by those academicians who wished to remain with classical approaches to art.

From 1888 to 1891, Henri went to Paris and attended the Academy Julian, who curriculum offered much freedom from academic strictures. He was also accepted at the Ecole des Beaux Arts. In 1891, he returned to Philadelphia for several years and studied again at the Academy. He became closely associated with John Sloan and William Glackens and taught at the Pennsylvania School of Design for Women and emphasized originality and painting without regard to earning money from it.

For awhile, he painted in the Impressionist style he learned in France but changed to the more realist style of Dutch painter Franz Hals.

In 1902, after several more years in Europe, he taught at the Chase School of Art and the New York School of Art, and Sloan and Glackens, subscribers to his theories, also came to the city. From that point, Henri led the fight against the Academics. In 1909, he established his own art school, and the organization of “The Eight,” a group of artists that, in 1908 publicly rejected what they viewed as restraints from the National Academy of Design. Those who opposed the National Academy of Design’s ideals believed art should be relevant to contemporary and everyday life rather than be created for “popular taste.” This philosophy translated to artwork became known as Social Realism.

From 1925 to 1928, Henri taught at the Art Students League, and encouraged his students to have confidence in their own instincts and to focus with sympathy on their subjects. He asserted they should ignore prevailing styles such as Impressionism and Academism and preached tonal rather than colorist styles and a technique of painting quickly in a slashing manner to capture the strength of the moment. A group of artists banded with him to be called the Ashcan School by others because of their depictions of the less pleasant side of life in New York City, thus Social Realism. A book titled The Art Spirit is a compilation of his teachings and letters and summarizes his attitudes towards art.

He was an early visitor to the West and Southwest, primarily New Mexico with occasional trips into Arizona. He first visited California in 1914, when he was in San Diego as coordinator to plan an art exhibit extension of the Panama-Pacific International Exposition, held first in San Francisco in 1915. During this time he lived in La Jolla and did portraits of Indians, the black youngster who sold papers at the train depot, Chicanos, Chinese and other ethnic types. In September of 1914, he exhibited 14 of these paintings at the Museum of History, Science and Art in Los Angeles. He returned to San Diego the following year and also went to San Francisco where he was awarded a silver medal at the PPIE.

Santa Fe from July to October, 1916, and returned in 1917 and 1922. However, he was not content to stay in the that part of the country because he missed the activity of New York City. In Taos, he became a member of the Taos Society of Artists. During these trips, he painted about 240 major works, about half of them Indian subjects expressing his ongoing interest in diverse types of people. He also painted landscapes, many of them in pastel, and he often turned to landscapes to relax from a difficulty with a portrait.