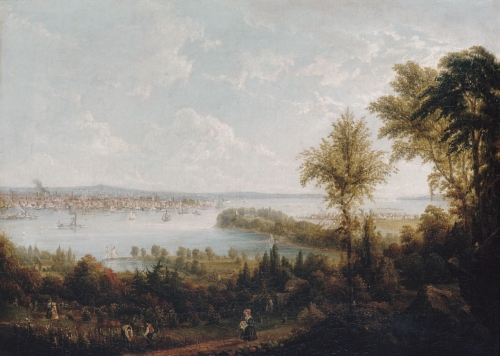 View of the Bay and City of New York from Weehawken, 1840

Born in Reading, England, Robert Havell was the son of an engraver, and was expected to follow that profession. Fulfilling his destiny, he is remembered for his aquatint engraving of all but the first 10 plates of John James Audubon’s Birds of America. He first visited Audubon in 1839 in New York City and traveled and sketched the countryside in a homemade horse-drawn trailer, and together they had skills that were well met. He also did artwork in oil and watercolor in Hudson River style with Luminism. However, he preferred to think of himself as an engraver.

Until 1841, he lived in Brooklyn and in 1842 his travel-weary wife established a house for the family in Ossining (Sing Sing) on the Hudson River, and he later, 1857, moved to Tarrytown, living there to his death in 1878. During this time he did landscape painting that in style and subject matter fit the criteria for being Hudson River School painting. Among his titles were several titled View of the Hudson River, as well as Sunset Near Sing-Sing and Fauns Leap, NY.

Havell traveled frequently, sketching and taking notes and then doing studio landscapes in oil and watercolor as well as making engravings, the later which remained his favorite medium. His engraving, West Point from Fort Putnam, received much public attention, and he also did engravings of American cities.