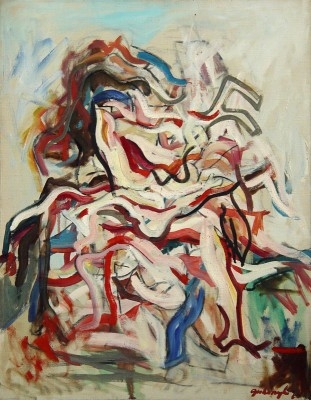 Robert Goodnough, a painter whose stylistic evolution from vibrant, Cubist-inspired abstractions to Color Field canvases made him one of the least definable members of the second-generation Abstract Expressionists, died on Oct. 2 in White Plains. He was 92 and lived in Thornwood, N.Y.

The cause was complications of pneumonia, said Eric Brown, a partner at the Tibor de Nagy Gallery.

In a career that lasted more than half a century, Mr. Goodnough (pronounced GOOD-now) eluded the neat categories that art critics relied on to codify the work of the Abstract Expressionists. He moved among the second-generation members of the school but at the same time stood apart, and his work — kinetic, calligraphic dashes of primary colors in his early career, and subtle pastels beginning in the 1970s — often flirted with figuration.

“I like to work freely, to slash with the brush and let loose,” he once told an interviewer. He then added, confoundingly, “I also like to work carefully and with discipline.”

Allergic to self-promotion and stylistically mercurial, he never achieved a success commensurate with his talent, although he exhibited at the blue-chip galleries Tibor de Nagy and André Emmerich for most of his career. Instead he achieved the ambiguous fame of being known as one of the most underrated artists of his generation.

Robert Arthur Goodnough was born on Oct. 23, 1917, in Cortland, N.Y., and grew up nearby in Moravia, in the Finger Lakes region. After earning a fine-arts degree from Syracuse University in 1940 he was drafted into the Army and served in the field artillery, painting portraits and murals at military installations.

In 1946 he moved to Manhattan. He studied at the Ozenfant School of Fine Arts and attended Hans Hofmann’s celebrated summer school in Provincetown, Mass., where he met the artists Alfred Leslie and Larry Rivers and the critic Clement Greenberg. At meetings of the Club, a famous downtown discussion group made up mostly of abstract painters, he became friends with Willem de Kooning and Mark Rothko.

Greenberg and the art historian Meyer Schapiro selected him to exhibit in a group show of emerging artists at the Kootz Gallery in 1950, and two years later he had his first important one-man show, at Tibor de Nagy. He also contributed to Art News, where he wrote “Pollock Paints a Picture,” one of the most celebrated of the magazine’s artist-at-work articles, with now-legendary photographs of Jackson Pollock in his studio by Hans Namuth.

After earning a master’s degree in art education from New York University in 1950, he taught carpentry at the Fieldston School in the Bronx until 1960, when he began making a living from his art.

Mr. Goodnough’s earlier work, influenced by Mondrian, Matisse and Synthetic Cubism, deployed patches and strokes of paint that suggested tumult and frenetic activity. “Some of his thicket-like designs throb with the fervor of an old symbolic representation of the Burning Bush, while others have the formal, explicit robustness of Léger,” Stuart Preston wrote in a New York Times review of a 1962 show.

In violation of abstractionist orthodoxy, he sometimes embedded images in the complex mesh of what he liked to call “color shapes.” Charging Bull (1958) depicts, unmistakably, a charging bull. He also experimented with collages in a manner that recalled Matisse’s cutouts and made sculptured constructions of dinosaurs — a lifelong enthusiasm.

One of Mr. Goodnough’s most striking works from this period, Form in Motion, is a large mural executed in 1967 for the Manufacturers Hanover Trust offices in Midtown Manhattan, its vigorous patches of color arrayed in an onrushing to-and-fro pattern suggestive of the pedestrian scrum on the city’s sidewalks.

In the early 1970s, Mr. Goodnough began shifting toward Color Field painting, usually executed in acrylic and oil, to which he added his own idiosyncrasies. In Slate Grey Statement, one of the first in this new style, pale dashes of color cluster on a ghostly background of silvery gray. In later paintings the bits of color, now jagged, shardlike and prismatic, take flight across the canvas like a flock of birds. In the 1980s, Mr. Goodnough returned to a style not unlike his earliest work.

Although he never received a retrospective at a major museum, in 1969 Mr. Goodnough was given a one-man show at the Whitney Museum of American Art and the Albright-Knox Art Gallery in Buffalo to showcase his series of serigraph prints One, Two, Three (An Homage to Pablo Casals).

He is survived by his wife, Miko; a daughter, Kathleen, of Thornwood; and a brother, Philip, of Moravia.