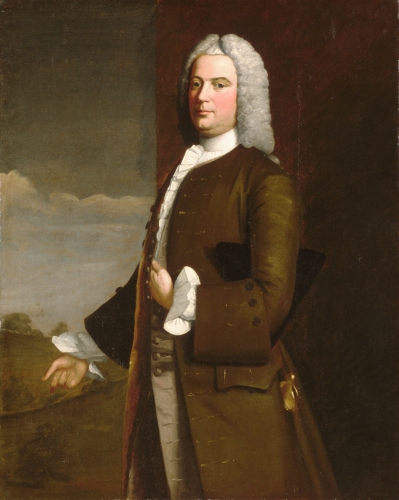 Little is known about the actual life of this artist, “considered the first American-born painter of note” (Gustafson), but his great grandfather, named Robert Feke, settled in Watertown, Maine in 1631. It is thought the artist was born in Oyster Bay, Long Island where he grew up with his Baptist family and that he died in either Bermuda or Barbados. He is thought to have been a mariner who traveled widely to England and Europe, and he appeared in Boston by 1748. In 1746, he was in Philadelphia.

Feke was an itinerant, spending time in many New England states. His documented career seems only to have lasted a decade, 1741 to 1751, when he left Newport, Rhode Island. About 60 portraits of his have been found, and their style shows the influence of John Smibert. But they also showed Feke’s unique qualities of vivid color, many flattened shapes, and emphasis on texture of clothing and furniture. A well-known group portrait by him is Isaac Royal and His Family, now at Harvard University.

His subjects seem to have character and quite often appear to be psychological studies. It is typical that they are in the foreground of a landscape, sometimes their home. In 2005, the Farnsworth Museum in Rockland, Maine acquired the earliest portrait of a Maine subject, Reverend Seth Storer, by a native-born American artist. For many years it was thought to have been painted by John Smibert, but within the last decade research has shown the portrait was in fact by Robert Feke. Scholar Henry Wilder Foote, who originally misidentified the painting as belonging to Smibert, wrote: “The face is thoughtful and serious, but gentle, and the portrait is one of Smibert’s most pleasing pictures of Puritan ministers.” Indeed, this was an apt description of work by Feke.