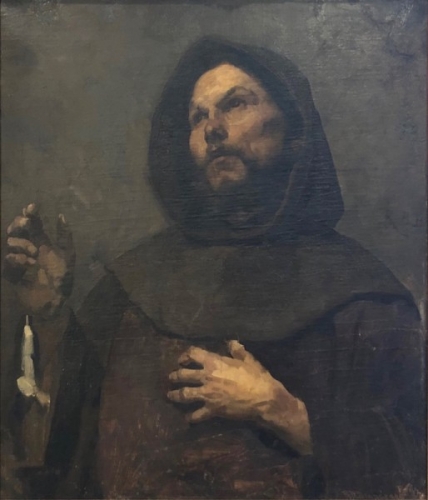 Robert Bolling Brandegee, painter and teacher was born in Berlin, Connecticut in 1849. Although information about his early art training is vague it is believed that he studied with John Henry Hill and later had a winter of instruction with Thomas Charles Farrer. Brandegee’s early works were small-scale watercolors painted in the exacting technique and brilliant palette of the American Ruskinian circle, the Pre Raphaelites.

In April, 1872, Brandegee left for Paris where he worked in the small atelier of Louis-MarieFrancois Jacquesson de la Chevreuse, and, on August 24, 1875, enrolled at the Ecole des Beaux-Arts.’ Among the other American artists who studied with Jacquesson were J. Alden Weir, Dwight William Tryon, and Montague Flagg. (Weir later became a member of the New York selection committee for the 1889 Exposition and was probably instrumental in having Brandegee’s one entry accepted.)

Once in Paris, Brandegee broadened his painting technique and abandoned his early interest in still-life and flower compositions to concentrate on portraiture and figure studies; his new concerns were a direct result of his instruction in Paris, which stressed drawing from the human figure. He also painted genre, landscape, portraits, flowers, still lifes and allegorical subjects.

In 1880 he returned to America, where until 1903, he diverted his energies more into his teaching position at Miss Porter’s School in Farmington, Connecticut, than into his painting.

He is best remembered as an American Pre-Raphaelite. Brandegee painted in the style he developed in Paris and practiced in America that displayed the strong influence of Frank Duveneck and the Munich School. His dramatic contrasts of light and dark and the broad and direct painting technique he employed demonstrated his mastery of the skilled influences on his artistic career. Although Brandegee may not have known Duveneck personally, he saw Duveneck’s art at the Society of American Artists, where Brandegee, Duveneck, and Flagg all showed their portraits during the early 1880s.

His work also was said to display a strong appreciation of Titian, who was highly esteemed at the Ecole des Beaux-Arts, where the painstaking reproduction of old masters represented the core of the curriculum.

He exhibited regularly during his life at various locations including the Society of American Artists, 1880s; the 1889 Exposition; the Pennsylvania Academy of Fine Arts; the National Academy of Design and others. He also executed a number of notable mural decorations. Brandegee’s work can be found in various important public and private collections.

He passed away on March 5th, 1922 in Farmington, Connecticut.