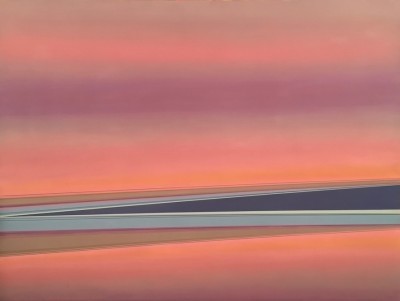 Rita Letendre is a painter, printmaker and muralist. She was born in Drummondville, Quebec. Her family moved to Montreal in 1941, where she lived until 1962. During the 1960s she lived in Paris, France; Rome, Italy; Tel Aviv, Israel and Los Angeles, California (1). In 1970, she moved to Toronto, Ontario, which is where she currently (November 2009) lives and works.

Her mediums include oil, acrylic, gouache, watercolour, pastel, lithography, serigraphy and silkscreen. Her oils and acrylics have been applied by several methods over the years including brush, airbrush, spatula, palette knife, hands and fingernails. Being a life long abstractionist, she focuses on colour, shape and texture.

Quote: “Light and colour, and sometimes the absence of colour, have always been the key elements in my painting. With its different values, colour reflects the shades of life. But light, from the first shock of birth to the last breath of life – light is my life.” – Rita Letendre

Quote: “My painting is non-figurative, abstract, maybe it’s lyrical. All the terminology is not important. What is important is the actual painting. When you’re looking at the painting you’re looking at something real, and that’s what counts.” – Rita Letendre

She is mostly self-taught. Her formal art education consisted of a year and a half at the Ecole des Beaux-Arts, Montreal (1948 – 1950). She left the school and became associated with the avant-garde art revolution that was taking place in Montreal, at that time, largely under the leadership of Paul-Emile Borduas (see AskART) and Les Automatistes (2).

Quote: “Borduas made you think he made you analyse yourself. And that is the most important thing (about him)…He said ‘to be a great artist you have to have an understanding of your own feelings in order to express them’; he was a Zen master.” – Rita Letendre.

She began exhibiting in 1952 with Les Automatistes in small venues like bookstores and restaurants. “Espace 55″ (1955) at the Montreal Museum of Fine Arts was one of her first major group exhibitions at a public venue. Since then her group exhibitions have included, three Biennials of Canadian Painting at the National Gallery of Canada, Ottawa (1959, 1963,1968); “Non-Figurative Artists of Montreal” also at the National Gallery of Canada (1960); “Twenty-Five Years of Painting in French Canada” in Spoleto, Italy (1962); “Contemporary Canadian Art” at the Tate Gallery, London (1963); the “Osaka Worlds Fair” (1970); the “18th National Print Show” at the Brooklyn Museum, New York (1972); and “The Crisis of Abstraction” at the National Gallery of Canada (1992). She has also exhibited in the 1960, 1961 and 1962 Montreal Museum of Fine Arts Spring shows; with the Royal Canadian Academy of Arts in 1964, 1967 and 1970; and at the Museum of Quebec (Quebec City) in 1973.

She has had over 60 solo exhibitions in private and public galleries across Canada, the United States, in Europe and in Israel. Her first solo exhibition at a major museum was at the Montreal Museum of Fine Arts in 1961. She also showed her work jointly with Ulysse Comtois (see AskART) at the Montreal Museum of Fine Arts in 1962. Recently, the Museum of Quebec held a retrospective of her works, in 2003, titled “Rita Letendre, Aux Couleurs du Jour” which travelled to the Winnipeg Art Gallery (Manitoba) in 2005. Also, in 2005, the Robert McLaughlin Gallery (Oshawa, Ontario) held a retrospective titled “Rita Letendre, Beginnings in Abstraction”.

Examples of her murals can be seen at the Exxon Building, New York; Sheridan Mall, Pickering, Ontario; and the Toronto General Hospital. Her first large scale (22′ X 21′) out door mural “Sunforce” (1965) is located at California State University, Long Beach (4). Her largest mural the 60′ X 60′ Sunrise (1971) on the side of the Neill-Wycik Building, Toronto was recently covered when the building underwent a major renovation in 2007.

(2) In the 1960s, she abandoned the gestural style of Les Automatistes and began her most famous period producing hard edge paintings following the direction of Les Plasticiens.

(3) She travelled with her husband Ulysse Comtois (see AskART). In Italy she met sculptor, Kosso Eloul (see AskART) whom she married in 1967.

(4) In 1965, professor Kenneth Glenn (see AskART) of California State University at Long Beach and Kosso Eloul organized the “Long Beach International Sculpture Symposium”. Patterned after several such symposia held in Europe, the Long Beach symposium was the first event of its kind held in the United States. More importantly, it was a significant experiment in the formal collaboration of art and technology. Each of the invited artists (selected from a worldwide roster of distinguished sculptors) was paired with an industrial sponsor who provided technological assistance in the form of expertise, access to facilities, equipment, and materials. The on-campus site also provided students with the opportunity to observe and assist established artists in an environment that was very different from the usual classroom activities.

In Letendre’s case she was teamed with Flexcoat Corporation. Special epoxy paints were chosen because they would bond chemically to the surface and not fade, flake, chip or crack. The colours were blended to Letendre’s specifications; she particularly wanted an intense cadmium yellow. The paint did not fulfill its promises for durability and colour fastness; the work has since been restored. Author’s note: Cadmium Yellow pigments are not suitable for exterior applications and for mural painting techniques. They tend to discolour upon combined exposure to the light, water and CO2, whereas if exposed to the same amount of light used on a canvas or panel it has excellent permanence. Source: Artists’ Pigments. A Handbook of Their History and Characteristics (1986), Vol. 1, L. Feller, Editor, Cambridge University Press, London, (pgs 65 -108); and Pat Tonkin, Rona Home Centres, Paint Department.

Prepared and contributed by M.D. Silverbrooke