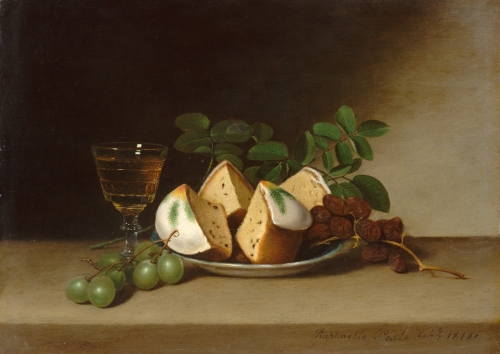 Raphaelle Peale was born in Annapolis, Maryland in 1774. He was the eldest son of Charles Willson Peale, under whom he first studied in Philadelphia. He was the first of Peale’s children to survive infancy. In the early 1790s, he helped his father run the Peale Museum in Philadelphia. In 1796 he attempted, together with his brother Rembrandt, to organize a portrait gallery, which apparently failed, for in 1799 he had settled in Philadelphia as a miniature painter.

He spent the major part of his life in Philadelphia. Raphaelle was the tragic figure in the Peale household. Full of impish humor and artistic genius, he was never able to earn a living from his art. In the absence of commissions he turned his imagination to helping his father in the invention of stoves, fireplace improvements and wooden bridges, and in the mounting of the larger animals in the museum. In 1803, John L. Hawkins, the English inventor, allowed Raphaelle to take his physionotrace, a profile cutting machine, with him on an extended Southern trip. The device was a huge success and Raphaelle made a small fortune cutting thousands of profiles. But he spent it quickly, and for the most part, like other family members, faced constant financial crises.

In 1797, at the age of twenty-three, Raphaelle married Martha (Patty) MaGlathery, a full-figured Irish beauty. She bore him seven living children, four of them boys and three girls. Three others did not live.

Raphaelle’s hands became more arthritic, and, as a combination of alcoholism and gout made steady work impossible, he grew more dependent on his father. His wife, a pretty shrew of a woman, was forced to take in boarders to support the family. In 1815 he abandoned miniature painting and turned to still life, most of which was “trompe l’oeil’ or deceptions, as Raphaelle called them. He was one of the first important painters of still life in this country and his work, together with that of his uncle, James Peale, to which it bears great similarity, exerted a profound influence on the development of this kind of painting in America.

He traveled extensively and advertised his work in local newspapers by offering discounts and guarantees. As his last job before he died, he was reduced to writing “lovesick poems” for a baker to put on cakes. On March 5, 1825, just days before his 51st birthday, he died of cold exposure on a Philadelphia street while under the influence of alcohol.

Sources include:
Masterpieces of Art, Catalogue of the New York World’s Fair, 1940
From the Internet, AskART.com
Article in Smithsonian Magazine written by Lillian B. Miller (date unknown)
Article by M. Therese Southgate, M.D. in the Journal of the American Medical Association, August 23/30, 1995
Time magazine, March 9, 1959
Philadelphia Story by Phoebe Lloyd in Art in America, November 1988