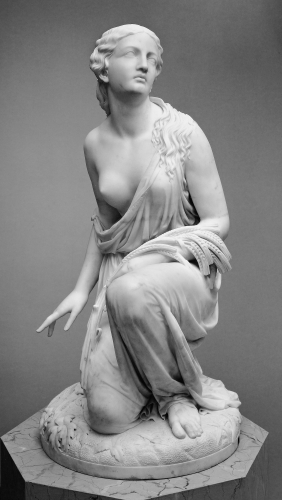 Born in Waterloo, New York, Randolph John Rogers became an expatriate sculptor of idealized figures, portraits, and commemorative works in Neo-Classical and Realist styles. He worked in clay, plaster, marble and bronze, and lived both in Italy and the United States.

Rogers was raised in Ann Arbor, Michigan, and as a young man did woodcuts for the local newspaper, The Michigan Argus, and also worked as a baker’s assistant and a dry goods clerk. In 1847, he moved to New York City, where he hoped to find work as an engraver, but failing to do so, worked in a dry goods store owned by John Steward, Jr., and Lycurgis Edgerton. Impressed by his talents at drawing and modeling, they paid for him to go abroad. He left in the fall of 1848, going first to Florence where he began study in 1848 with Lorenzo Bartolini at the Accademia di Belle Art. He became skilled at modeling in clay and plaster but did not learn to carve marble until later.

In 1851, he established a studio in Rome, and, although he returned occasionally to America, he, “over the next several decades, was a pillar of American expatriate artist life.” (114). Assuring his success was his modeling of Nydia, the Blind Flower Girl of Pompeii. Many replicas were made, and reportedly it rivaled Prosperine by Hiram Powers in numbers of copies. Having become proficient at marble, Rogers carved busts for many persons who visited his studio.

In 1858, he returned to America for his first public commission, which was a life-size statue of John Adams for Mount Auburn Cemetery chapel in Cambridge, Massachusetts. (The statue is now at Harvard University in Memorial Hall). Rogers worked out of his studio, which was in the National Academy of Design. He got a second commission, having lobbied successfully, for a set of doors at the U.S. Capitol building, which are now at the central portico of the Rotunda’s east facade. They represent the life of Christopher Columbus. Rogers also finished an equestrian memorial of George Washington, which had been in progress by Thomas Crawford when he died in 1857.

In the 1860s and 1870s, he was highly prolific. His work included religious and literary subjects such as Isaac from the Old Testament, and Fasti from Ovid, which received over 100 orders for replicas. He modeled the Angel of the Resurrection in memory of Samuel Colt, the arms manufacturer, for his burial spot at Cedar Hill Cemetery in Hartford, Connecticut. In 1877, for the dome of the capitol building at Hartford, he did a figure, destroyed in 1938, The Genius of Connecticut. In Cincinnati, as well as Providence, Rhode Island, Detroit, and Worcester, Massachusetts, he did “formula” post-Civil War monuments.

Among his portrait statues are Abraham Lincoln (1871) for Fairmount Park in Philadelphia; and William Seward (1876) for Madison Square in New York City.

Living most of the most productive time of his career in Rome, he was elected an “academician of merit” and resident professor of sculpture in 1873 to the Accademia di San Luca, the oldest art academy in the world. He was the first American to receive these honors. In 1884, the Italian government named him a Knight of the Crown of Italy. Two years before that, Randolph Rogers suffered a debilitating stroke, but he continued to supervise production of his sculptures.

He died in Rome in 1892, and is buried in Campo Verano, a main cemetery in that city. His grave is marked by his bas-relief, Flight of the Spirit, completed about 1868.

Before his death, Rogers donated to the University of Michigan at his home town of Ann Arbor nearly a hundred plaster models and casts. Unfortunately many of those have been destroyed because of inadequate care and storage.