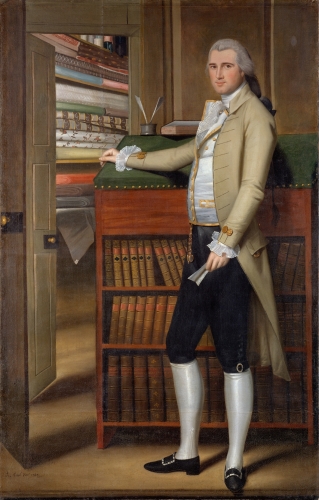 A portrait painter, Ralph Earl was one of three-prominent southern New England portraitists who carried on the high standards set by John Singleton Copley (1738-1815). With Gilbert Stuart (1755-1828) and John Trumbull (1756-1843) Earl was trained in England and, returning home, was one of the three “first well-trained American painters to walk American soil” (Flexner 65) after the Revolutionary War.

They revived a tradition that had just begun to flourish before the interruptions of the War. Several times, Earl went to New York City attempting to gain wider attention, but he made little impression and returned to Connecticut where he had first arrived in 1775. In the judgment of American art historians, he became one of the state’s most historically significant artists, but during his lifetime, his reputation was diminished by his intemperance and apparent immorality in that he committed bigamy and deserted both his wives. During the last fifteen years, he wandered the streets of New Haven, turning out scores of portraits and landscapes with an uneven hand. “One month he would paint with startling exactitude, the next, as if he wielded a shoebrush.” (Flexner 68)

In the prime of his career, Ralph Earl is credited with skillful depictions of prominent Connecticut persons, especially from New Haven such as Roger Sherman, a New England shoemaker who rose to be a prominent lawyer, judge and signer of the Declaration of Independence, Articles of Confederation and the Constitution. Earl completed the Sherman portrait before the War and before his painting skills were refined (some thought diluted) by training in England. The painting is described as being “wild, crude, and strange: one of the most exciting pictures of its time. . . .revealed with so intense a vision that he seems less an individual than the ultimate distillation of strong and righteous New England” (Flexner 26).

A plus of Earl’s education in England was the acquiring of new skills of composition including fine details of clothing, modulated skin tones, natural expressions and the inclusion of objects personalizing the subject. A minus was the eradication or taming of the aggressive approaches that made Sherman such a striking figure—replaced by more refined, stereotypical poses.

Many of Ralph Earl’s post-England paintings have landscape backgrounds related to the sitter and positioned as though seen through a window. His portraits are very realistic with skillfully created skin tones, natural expressions and finely-detailed clothing. He often painted on coarsely woven large canvases that gives his work a rough finish.

The paintings reflected the artist’s seven years of study in England, beginning 1778, when he lived in the county of Norfolk and in London as a pupil of Benjamin West (1738-1820) and much influenced by the painting of Joshua Reynolds (1723-1792).

Ralph Earl was one of the many artists who fled America during the Revolution, a migration that nearly made art extinct on the American continent during that period. It was said that the art action that had been stirring in the Colonies transferred to the London studio of American expatriate Benjamin West, a favorite of the English royal family and a revered teacher and painter by visiting Americans, Europeans and English men and women.

Ralph Earl was born in 1751 in Worcester County, Massachusetts, the son of a prosperous farming family. He learned the trade of painting portraits by observing the work of other portraitist, and both he and his younger brother James (1761-1796) became painters. In 1774 Ralph settled in New Haven, where he painted portraits for three years and married his cousin, Sarah Gates. It was during this time that he did the Sherman portrait and his work of this period is retrospectively judged as being provincial and primitive, and not up to the high standards to which he would be exposed in England.

At the outbreak of the Revolutionary War, Earl demonstrated his landscape and genre painting abilities by joining the engraver Amos Doolittle to create with separate mediums action scenes of the battles of Lexington and Concord. Earl, using oil, first painted a big landscape and then, using Doolittle as model, imposed military figures, some framed by tombstones, upon the canvas. (Doolittle did the same type of subject matter as an engraving).

Earl was a Loyalist and fled Connecticut during the American Revolution to escape imprisonment as a traitor. Abandoning his family, he disguised himself as the servant of British Army captain John Money and accompanied Money to England in the spring of 1778. He settled in Money’s home town of Norwich, where he painted his first English portraits. By 1783 he was in London, a student of Benjamin West. Four of his portraits were exhibited at the annual exhibitions of the Royal Academy in 1783-1785, and his approximately two dozen English portraits indicate that he successfully adopted the cosmopolitan London manner.

Earl, apparently not divorcing his first wife, returned to the United States in 1785 with an English bride, Ann Whiteside, and sent an announcement of his return to newspapers in Hartford, Connecticut and Worcester, Massachusetts. He was briefly in Boston, and in September 1786, was sentenced in New York City to prison because of nonpayment of personal debts. During this time, he and his family were supported by the Society for the Relief of Distressed Debtors, and the Society’s members sent their families and friends to the artist to have their portraits painted.

Released from prison in January 1788, Earl returned to Connecticut. His patron was Dr. Mason Fitch Cogswell, a founding member of the Society for the Relief of Distressed Debtors, who gave the artist introductions to his many friends, acquaintances and even his patients.

Earl found enthusiastic patronage for his portraits among the social leaders of western and central Connecticut. His sitters during the next decade included the Boardmans and Taylors of New Milford, the Wolcotts of Litchfield, and the Ellsworths of Hartford. They are often portrayed in richly detailed domestic settings or in front of landscapes of the towns they lived in. The portraits of “Mr. and Mrs. Oliver Ellsworth” show them with their chairs, books and carpet and a scene through a window with the facade and lawn of their home.

For the next decade Earl successfully translated his education in England into a new Connecticut style, He also painted on Long Island, in New York City and, toward the end of his career, in western Massachusetts and southern Vermont. The scale of these portraits and their rich colors and detailing had an impact on local artists like Joseph Steward of Hartford, who imitated Earl’s new Connecticut manner with great success.

Because of his skill as a landscape painter, Earl received commissions to paint separate views of his patrons’ houses. In the late 1790′s he painted a panorama of Niagara Falls. His few surviving landscapes date from this period and are believed by some critics to reflect the deterioration of his personality from excessive alcohol. Divorced from portraits and affected by his problems with perspectives, his landscapes seemed inferior to his earlier work. He was capable of recording nature simply and powerfully, but “lost hold on the logic” (Flexner 70) of some of his later compositions that combined marine and landscape and figures without a central figure.

Ralph Earl died in 1801 in Bolton, Connecticut, of alcoholism, the disease that had plagued him since his confinement in the New York debtors’ prison. He is credited not only as having memorable skills as a portraitist and landscape painter but for unlocking the talents and inhibitions of younger Connecticut painters such as Joseph Steward and Reuben Moulthrop.

Sources:
Michael David Zellman, “300 Years of American Art”
James Flexner, “The Light of Distant Skies”
Peter Falk, “Who Was Who in American Art”