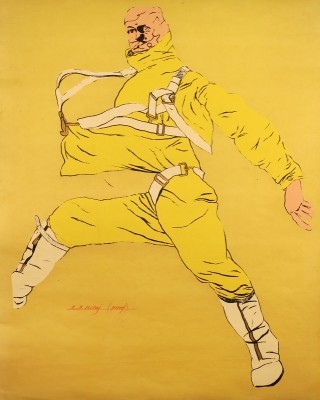 R. B. Kitaj, an American artist who became influential in Britain with figurative and Pop Art paintings that ran against the grain of 1960s and 70s abstraction, died on Sunday at his home in Los Angeles. He was 74.

His death was confirmed by Tara K. Reddi, vice president of Marlborough Fine Art in New York, the gallery that represented Mr. Kitaj in the United States. The cause of death was not given.

Later in his career, Mr. Kitaj (pronounced kit-EYE) celebrated Jewish culture and his Jewish identity in his art. But he emerged professionally as part of the British Pop Art movement in the early 1960s, along with artists like David Hockney and Eduardo Paolozzi. His early works merged Pop collage techniques with the brushwork of Abstract Expressionism.

He also became known for tapping a wide range of art and intellectual sources, including Kafka, Kierkegaard and Walter Benjamin and painters from Titian to Cezanne.

Mr. Kitaj had his first solo exhibition in 1963, at Marlborough Fine Art in London, beginning a relationship with the gallery that lasted more than 40 years. One of his most important contributions to British art came in 1976, when he organized an exhibition called “The Human Clay” at the Hayward Gallery in London. In his essay for the exhibition catalog, Mr. Kitaj identified as “School of London”, in which he included Francis Bacon, Lucian Freud, Frank Auerbach, Leon Kossoff and himself as central figures.

The exhibition was considered controversial because it championed figurative painting at a time when abstraction reigned, particularly in the United States under the long-term tutelage of critics like Clement Greenberg.

At the same time, Mr. Kitaj began to reconnect with his Jewish heritage. Paintings like “The Jew, Etc.” (1979) feature an alter-ego Everyman named Joe Singer, and in 1989 Mr. Kitaj published “The First Diasporist Manifesto”, in which he discussed the relationship between Judaism and his work. A “Second Diasporist Manifesto”,composed in 2005, opened with a paraphrase of Philip Roth from “The Counterlife: I’ve got Jew on the Brain. Jews are my Tahiti, my Giverny, my Dada, my String Theory, my Lost Horizon.”

Mr. Kitaj was born Ronald Brooks on Oct. 29, 1932, in Chagrin Falls, Ohio, near Cleveland. After his father abandoned the family, his mother married a Viennese refugee named Walter Kitaj in 1941, and Ronald adopted his surname. R. B. Kitaj studied at Cooper Union in New York and the Academy of Fine Arts in Vienna in the early 1950s before marrying a fellow American student, Elsi Roessler. He worked as a merchant seaman and later as an artist in the United States Army, drawing Russian tanks for war games.

Mr. Kitaj settled in London in 1958 and studied on the G.I. Bill at the Ruskin School of Drawing and Fine Art in Oxford and the Royal College of London, where he met Mr. Hockney and collaborated on collages with Mr. Paolozzi. He became the first American artist since John Singer Sargent to be elected to the Royal Academy. He remained in contact with American artists, particularly the poets Robert Creeley, Charles Olson and Allen Ginsberg.

Over the course of his career, retrospectives of his work were held at the Hirshhorn Museum in Washington, the Los Angeles County Museum of Art and the Metropolitan Museum of Art in New York.

In 1994 Mr. Kitaj was the subject of a retrospective at the Tate Gallery in London, an honor rarely awarded to Americans. The show was received harshly by critics, who attacked the paintings and the didactic “prefaces” he wrote to accompany them. Afterward, Mr. Kitaj’s second wife, the painter Sandra Fisher, whom he married in 1983, died of an aneurysm at 47, prompting the artist to contend that critics, on this occasion, had literally committed murder. A 1996 painting titled “The Critic Kills” was signed, “By Ron and Sandra.”

After the “Tate War,” as he termed this episode, Mr. Kitaj moved to Los Angeles. He remained there from 1997 until his death.

He is survived by his sons, Lem, a screenwriter who publishes under the name Lem Dobbs, and Max, both of Los Angeles; a daughter, Dominie, of San Diego, and three grandsons.

The art critic Robert Hughes once wrote of Mr. Kitaj in Time magazine: “He draws better than almost anyone else alive.” Mr. Kitaj offered his own revision: “I draw as well as any Jew who ever lived.”