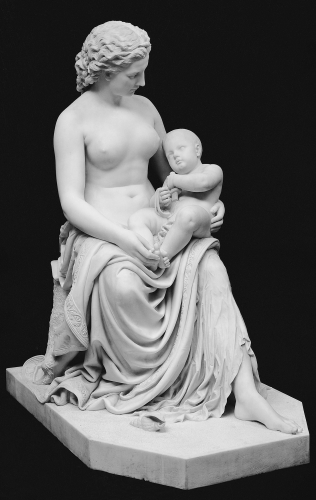 When Pierce Francis Connelly was four years old, his father converted to Catholicism and became an ordained priest. His mother became a nun soon after and the family moved to Europe. The father went to Italy and the mother to England with Pierce, her youngest child.

Connelly moved to Florence in 1860 and studied with the famous American sculptor Hiram Powers. In 1871 he exhibited several portrait busts at the Royal Academy in London. These caught the eye of Queen Victoria, who commissioned a bust of Princess Louise from him.

Connelly returned to the United States in 1876 for the Centennial Exposition in Philadelphia, where several of his sculptures were shown and well received. He left for New Zealand within the year and spent the rest of his life traveling in relative obscurity, sketching the natural landscapes he encountered.

He returned to Italy around the time of his father’s death and was later buried there himself—in a Protestant cemetery. He never forgave the Catholic Church, which he blamed for breaking up his family.