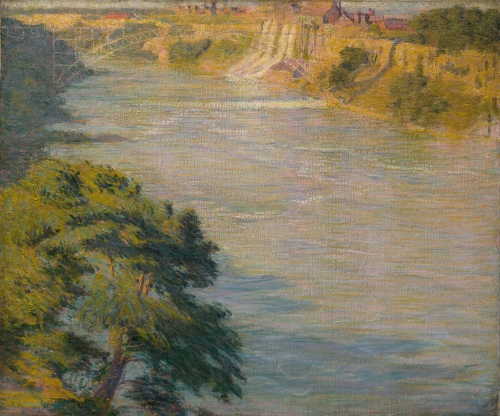 Painter, teacher and writer, Philip Leslie Hale is recognized for his decorative paintings of the female figure and for his interior scenes with figures as well as for his progressive approach to painting. However, his career went through several phases that included sporting scenes, figural studies of women including nudes, portraits, and allegorical works reflecting the overwhelming forces of nature.

Of the Boston painters of his time, he seemed the most fully committed to Impressionism, and his technique suggests the influence of French impressionist Edgar Degas. In most of his paintings, the landscape was more important than the figure.

He was a prolific writer in local newspapers and periodicals about the contemporary art scene, discussing the work of his Boston colleagues. He also wrote numerous books on art and art history including a study of Vermeer that was published in 1913. Among his writings are 1892 newspaper columns for Arcadia Magazine titled “Letters from Paris”, art criticism for the Boston Herald from 1905 to 1909; and art criticism for the Boston Evening Transcript. He argued for the Boston School of Art as led by Edmund Tarbell whose style was based on Impressionism with elements of Realism, especially figure painting.

Hale was born in Boston in 1865, the son Reverend Edward Hale, a Boston clergyman and a relative of Nathan Hale. He studied with Ellen Day Hale, his sister, and Edmund Tarbell at the Boston Museum School, with J. Alden Weir at the Art Students League in New York City, and then went to Paris for further studies at the Academie Julian and the Ecole des Beaux-Arts. He remained in France for fifteen years, returning to America about 1895. During that time, from 1888, he spent summers at Giverny, France with his good friend, artist, Theodore Butler, and became well acquainted with Claude Monet. Traveling throughout Europe, Hale visited the major museums, and copied the works of Ingres, Vermeer, Watteau and Michelangelo.

Hale married Lilian Westcott Hale, a well respected artist, and they had a daughter, Nancy Hale. He taught for many years at the Boston Museum School and also for several years at the Pennsylvania Academy of the Fine Arts.

He died in Boston in 1931, of a ruptured appendix.