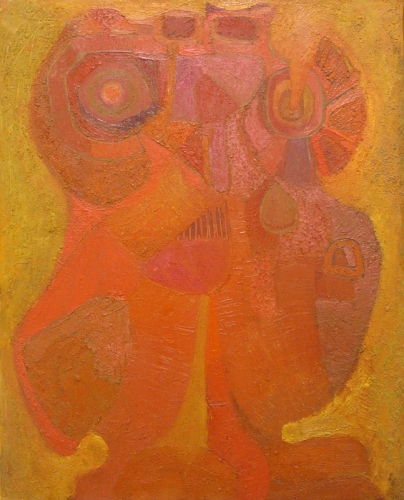 Pedro Coronel was born in March 25, 1922. He was a Mexican sculptor and painter, part of the Generacion de la Ruptura, bringing innovation into Mexican art in the mid 20th century. Cornel’s training was with artists of the Mexican muralism tradition, with influence from artists like Diego Rivera. This influence remained with the use of pre Hispanic themes and colors in his work. However, his artistic trajectory took him towards more use of color and more abstract forms in his work, due to influences from artists such as Rufino Tamayo. His work was exhibited and gained recognition in Mexico, the United States and Europe. Shortly before his death, he donated his considerable personal art collection to the people of Mexico, which was used to open the Museo Pedro Coronel in the city of Zacatecas.

Pedro Coronel is classed as part of the Generacion de la Ruptura. In the opinion of Santos Balmori, Coronel and Rufino Tamayo reinvented Mexican painting from its roots, finding a new way to connect the past with the present. Themes that appear in his work include mankind’s fears as well as anguish, pain and death. However, there are works which express love, sensuality, eroticism and life such as “Venus mexica”‘ (1949), ‘la nina de la morena”(1940) and “La dama de las frutas” (1949). He began his career as a sculptor which influenced his painting by adding volume and solidity to his images.

Although his aim in his work was spontaneity and freedom of expression, in reality it follows a trajectory leaning towards abstraction. His work has been divided into stages such as naturalist, structuralist, lyrical, chromatic, and the revival of native indigenous themes. His early work is mostly figurative. This work creates juxtapositions fields, idealistic images and a convergence of reality and fantasy. His later work is when his style is more personal and set, figures giving way to forms and color. From 1953 to 1957 his work is influenced by Expressionism with some influence from Picasso with topics from everyday life such as bottles, glasses or lamps. Notable works from this period include Retrato de Mujer in 1953 and Naturaleza Muerta in 1956. A later stage shows interest in allegories with mythical personages. These paintings include El Advenimiento de Ella and La Lucha both from 1958 and Mujeres Habitadas from 1960. After this, his paintings became more colorful with lines simplifying such as in Los Fantoches Luminarios in 1962 and Rincon de Sueno from 1961. From 1962 to 1963 influence from Rufino Tamayo can be seen in paintings such as Interno Magico from 1963. From 1966 to 1975 he worked became more abstract. These years also encompass the majority of his production. This later work is characterized by taking the use of color to its limits but not overdoing it. This use of color follows that of his predecessor, Rufino Tamayo, but Coronel’s innovation is the use of intense, more pure colors, and the harmonization of background with form, unlike other painters, including his brother Rafael, where the background is subservient to the main topic. Two colors which dominate many of his works are red and yellow, which tend to reflect melancholy, passion and loneliness.

While a member of the Generacion of the Ruptura, much of his work has pre Hispanic themes and colors, which were marks of the Mexican muralists. Works along these lines include La nina de la morena, La serie de los apostles and “El regreso de Quetzalcoatl” (The return of Quetzalcoatl), a later work which is semi abstract. His work has been described as having an element of violence similar to that of ancient Mesoamerican art.