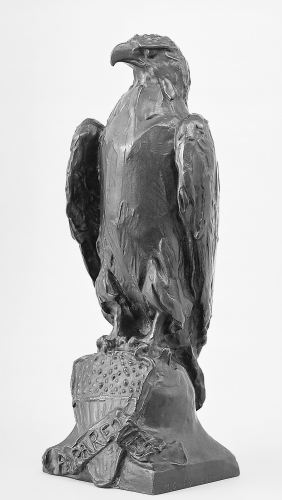 Known as a leading Beaux-Art sculptor, Paul Wayland Bartlett began his career specializing in animals and then turned to public portrait and equestrian statues. His most ambitious sculpture was the pediment for the Senate Wing of the United States Capitol in Washington D.C.

He was born in New Haven, Connecticut, and was the son of neoclassical sculptor Truman Bartlett, long time modeling teacher at the Massachusetts Institute of Technology.

In 1874, under his mother’s supervision, Paul Bartlett went to Paris to study where he became one of the first Americans to turn from the prevalent neoclassical style taught in Italy to the more progressive methods at the Ecole des Beaux Arts. Although he continuously returned to America, his primary residence remained Paris.

His teachers in Paris were Emmanuel Fremiet and Pierre-Jules Cavelier. In 1880, he began exhibiting at the Paris Salon, and won an honorable mention in 1887 for Bohemian Bear Tamer, now in the collection of the Metropolitan Museum of Art.

Bartlett first exhibited at the National Academy of Design in 1892, but future participation was erratic because of his time in France and the demands of his varied career including Directorship of the Glasgow Academy of Art and President of the National Sculpture Society in the United States.

In 1895, he insured his fame when he exhibited a series of small whimsical bronzes at the Salon of 1895, many which were later entered in the 1904 Louisiana Purchase Exposition in St. Louis. Intriguing aspects of these works were their small size, humorous treatment of subject, and colorful patinas, “an interest he was to maintain for the rest of his career.”

Paul Bartlett was the sculptor of the bronze equestrian Lafayette that was given by the United States to France and installed in the courtyard of the Louvre Museum. In the 1890s, he did several figures for the Library of Congress in Washington DC, and in the early 1900s in collaboration with John Quincy Ward, he executed pedimental figures for the New York Stock Exchange. In 1909, he received commission for the pedimental sculpture for the U.S. Capitol’s House of Representatives wing. This project involved setting up an enormous studio in Washington DC. In 1916, he completed a group of allegorical figures for the attic story facade of the New York Public Library.

Source:
David Dearinger, Editor, Paintings and Sculpture in the Collection of The National Academy of Design