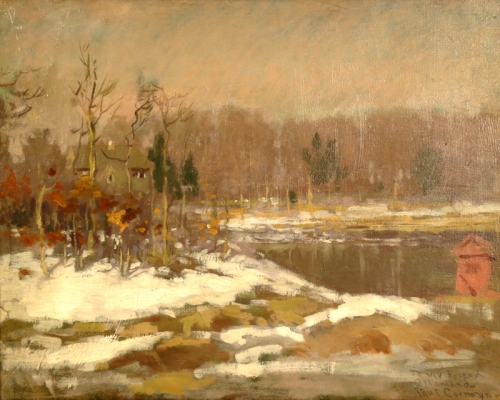 Paul Cornoyer was born in 1864 in St. Louis, Missouri. He studied there at the School of Fine Arts in 1881. His first works were in a Barbizon mode, and his first exhibit was in 1887. In 1889, he went to Paris for further training, studying at the Academie Julien, and returned to St. Louis in 1894.

By the early 1890s, his work was more lyrical and Tonal, and he applied this style to subjects such as cityscapes and landscapes. In 1894, he painted a mural depicting the birth of St. Louis for the Planters Hotel in that city. His activities during the next six years were not particularly profitable, however, and the whereabouts of his St. Louis paintings are scarcely known. One exception is the triptych, A View of Saint Louis, with its strong urban realism. It shows the Eads Bridge, which opened in 1874, and became the symbol of Saint Louiss urban modernity, a gateway to the West, and a marvel of engineering. Many other St. Louis artists also celebrated its construction.

In 1899, Cornoyer traveled to New York City, upon the encouragement of William Merritt Chase, who had acquired some of his work (probably the Parisian scene shown at the Pennsylvania Academy of the Fine Arts annual in 1896-97).

In New York, Cornoyer became a specialist in Tonal urban scenes, especially after rain with its blurred effects, his masterwork being The Plaza after Rain, purchased in 1910 by the new art museum of St. Louis. He was able to capture the wet, mirrored pavements with precision, streets with horse drawn carriages, trees, aligned buildings and streets.

In addition, Cornoyer taught at the Mechanics Institute in New York, and later was an instructor in Massachusetts, moving there in 1917. He painted and exhibited his works up until his death in 1923.