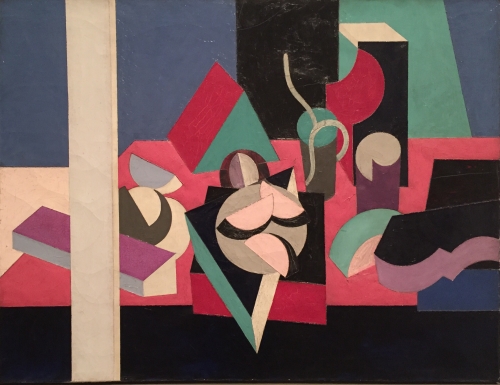 Born March 25, 1881 in Cambell County, Virginia to a prestigious family who traced its descendants to Patrick Henry, Bruce had all the advantages before reduced circumstances would force his family to move to Richmond, Virginia in 1885. By 1889, when he was eighteen years old, Bruce was orphaned and responsible for a younger sister, Mary. After graduating in 1897, Bruce worked for a real estate firm during the day and attended the Art Club of Richmond at night. He studied with Edward Valentine, a neoclassic sculptor, who encouraged Bruce in his artistic endeavors.

During 1900-01 Bruce attended the Virginia Mechanics Institute in Richmond where Valentine taught freehand drawing and drafting which would prove a fundamental pictorial ingredient of Bruce’s geometric still lifes. In 1902 he attended the New York School of Art to study with William Merritt Chase and Robert Henri who greatly influenced Bruce by urging him to loosen his style in the manner of Monet and Whistler.

In 1903 Bruce journeyed to Paris where he reacquainted himself with Helen Kibbey who was part of a group Chase took to Holland to study the Dutch masters and whom he married in 1905. Bruce began to frequent Gertrude and Leo Stein’s salon in 1904 where he saw the embodiment of European modernism.

The Bruce’s returned to Paris in September and rented a place on the Boulevard Arago which became a popular rendez-vous for Americans. In 1907 Bruce met Henri Matisse and was so overwhelmed he rented an apartment above Matisse’s apartment and atelier on the Boulevard Invalides. Bruce began to apply broad areas of Fauve color like Matisse. Bruce’s vibrant colors are his hallmark. He used color contrasts rather than light and shade to model form with a high degree of sculptural relief through warm and cool colors.

Between 1910 to 1912 the Bruce’s spent summers in Bousssac. The summer of 1912 the Bruce’s spent in Belle Ile-en-Mer off the coast of Brittany in the company of Arthur B. Frost. In late 1912 Frost introduced Robert and Sonia Delaunay to Bruce. This meeting was to precipitate a change in his painting style. He exhibited two of his first abstractions compositions to the Erster Deurtscher Herbstsalon in Germany, where Bruce and Marsden Hartley were the only Americans in the show. He submitted these same paintings to the Salon des Independents in the spring and the Salon d’Automne in the fall of 1913.

Bruce exhibited four painting at the 1913 Armory Show, and in 1914 he exhibited four large Orphic paintings at the Salon des Independents. Bruce was the only American artist to remain in Paris during and after the war, so integrated had he become in the Parisian milieu. At this time Bruce became independent from the Delaunay’s, and in 1914 he changed his style radically and began painting from photographs.

In 1915 Bruce sent some of his landscapes and still lifes to his best-friend Arthur B. Frost in New York where they were exhibited at the Montross Gallery in New York in 1916. Bruce also sent his six Compositions to Frost which were purchased by Katherine Dreier and hung as panels in her Central Park West home. Frost arranged to have these Compositions exhibited at the Modern Gallery in New York and also shown in the 1917 exhibit of the Society of Independent Artists.

Bruce’s separated in 1919 and his wife left with their son to New York. Bruce drew into himself and became reclusive. In 1936, just months after his arrival in New York, Bruce took his own life.