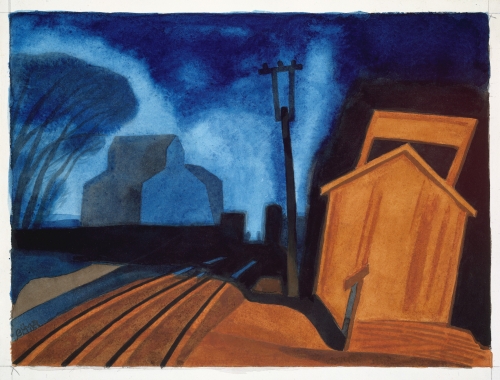 The son and grandson of architects, Bluemner was born in Hanover, Germany, in 1867, and was encouraged to follow in his family’s trade. He showed early promise as an artist as well, and his first one-man show of portraits was held at the Berlin Latin School in 1886. In 1892 he won a medal at the Royal Academy of Design in Berlin where he studied painting and architecture. Dissatisfied with the restrictive aesthetic policies of Emperor Wilhelm II’s government, Bluemner left for America that same year.

Bluemner arrived in New York, then moved on to Chicago in 1893, hoping to gain architectural commissions at the World’s Columbian Exposition. He designed prefabricated units for the Exposition and freelanced as a draftsman. He returned to New York in 1901, and the following year he won a commission for the Bronx Borough Courthouse that his partner finagled away using Bluemner’s design. Although Bluemner sued and eventually won the lawsuit, the experience permanently turned him away from architecture. Between 1908 and 1910, Bluemner began painting in earnest, making sketching trips throughout New Jersey and Long Island. In 1910, the year he “kicked the building business over,” he met Alfred Stieglitz, who sparked his interest in the artistic innovations of the European and American avant-garde. Bluemner painted his first oil in 1911.

In 1912 Bluemner sailed for Europe, where he had a one-man show of landscapes at the Gurlitt Galleries in Berlin. After Berlin, he traveled to Paris and Italy where he saw the work of Matisse, Cézanne, and the Futurists, and created thousands of sketches inspired by the museums he visited. Stopping over in England, Bluemner toured Roger Fry’s Post-Impressionist exhibition at Grafton Galleries and became fully committed to the modernist ideology.

Upon his return to the United States, Bluemner contributed one landscape to the 1913 Armory Show and wrote an article defending modernism for Stieglitz’s progressive publication Camera Work. The ongoing connection with Stieglitz had a significant impact on Bluemner’s career—in 1915 Stieglitz gave him a solo exhibition at his gallery, 291. Bluemner’s paintings of this period were tightly structured compositions in the Cubist manner blazing with Fauve-inspired reds, oranges, and contrasting hues. Bluemner exhibited in the 1916 Forum Exhibition and regularly at the Bourgeois Gallery (artist George Of introduced him to proprietor Stephan Bourgeois, who remained a lifelong friend). He also showed at the Montross Gallery, mainly exhibiting intensely colored oils synthesizing abstract and concrete form that were based on earlier sketches of New Jersey countryscapes and factories. Stieglitz continued to support him and gave him a solo show in 1928. The following year Bluemner had a one-man exhibition at the Whitney Studio Galleries.

Bluemner was fascinated with the formal, emotional, and spiritual qualities of strong color. He dubbed himself the “Vermillionaire” in reference to his reliance on bright red hues for his houses and barns. He explored his color theories in angular, brightly colored landscapes, abstracted from nature. As his career progressed, Bluemner found inspiration in classical music and Freudian concepts of the subconscious. His late compositions in oil or casein, on which he often bestowed titles alluding to music, became more abstract, displaying heightened emotional content, simplified masses, and pulsating color.

After his wife’s death in 1926, Bluemner moved to South Braintree, Massachusetts, to live in virtual seclusion. He continued to paint and exhibit until he was involved in an auto accident and told he could never paint again. Bluemner died by his own hand on January 12, 1938.

Underappreciated and financially impoverished during his lifetime, Bluemner is today the object of renewed critical and public interest. In 2005-06, his career was the subject of a major retrospective, “Oscar Bluemner: A Passion for Color,” organized by the Whitney Museum of American Art, New York. Bluemner is represented in private and public institutions, including the Metropolitan Museum of Art, New York; the Museum of Modern Art, New York; the Phillips Collection, and the Corcoran Gallery, both in Washington, D.C.; the Montclair Art Museum, New Jersey, and the Amon Carter Museum of Western Art, Texas.