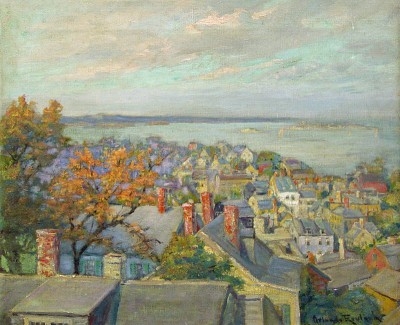 Looking Over Old Marblehead, circa 1928

Born in Illinois, Orlando Rouland became a painter of rural landscapes, scenes of New York City, and portraits of notable personages including Thomas Edison, Dame Nellie Melba, Sam Houston, John Muir and Theodore Roosevelt. He studied in Europe at the Julian Academy in Paris with Benjamin Constant and Jean Paul Laurens and also in London, Germany with Max Thedy, and in New York City.

Rouland’s wife was Minnie Dwight, a New York socialite who worked hard to promote her husband’s career. She was a patroness of the dancer Ruth St. Denis, and as a result of that friendship, Orlando Rouland did a painting of St. Denis performing “Cobras”.

In New York City, Rouland was a member of the Allied Artists of America, which he served as president from 1925 to 1928. He was also active in the Artist’s Professional League and the Lotos Club on behalf of exhibiting work by emerging artists.

Rouland and his wife had a summer home at Marblehead, Massachusetts where he did painting as well as at Cape Ann and Rockport. He was also a member of the Peconic Art Colony, spending summers in the Indian Neck area of Peconic, Long Island.

The artist’s professional papers are archived at the Grolier Club in New York City. Work by him is at the University of Texas and the Texas state capitol in Austin where the portrait of Sam Houston is in the Gallery of the Senate. Other collections representing the artist are ar Yale University, Trinity College at Cambridge University in England; the Historical Society of St. Paul, Minnesota; the National Gallery in Washington DC; and the Montclair Museum of Art in New Jersey.

Sources include:
The Grolier Club, New York City, http://www.grolierclub.org/LibraryAMC.RoulandPapers.htm
Peggy and Harold Samuels, The Illustrated Encyclopedia of Artists of the American West, p. 410

Peter Hastings Falk, Editor, Who Was Who in American Art
Allied Artists of America, http://www.alliedartistsofamerica.org/past_presidents.htm