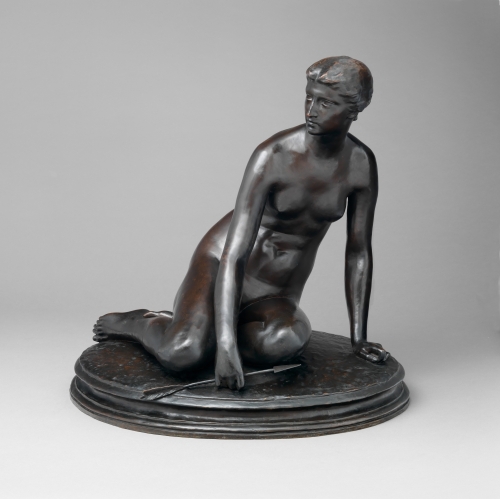 A native of West Suffield, Connecticut, Olin Warner became a noted medallist and was credited as being one of the sculptors who brought the Beaux Arts style from France to the United States. He popularized bas relief as he did numerous portraits with that method including one for the Philadelphia Centennial of 1876. Among his portrait bust subjects were artist J. Alden Weir and the Greek goddess, Diana.

He was the son of an itinerant Methodist minister and went to school in Amsterdam, New York until age 15 and then in Brandon, Vermont. For six years, he supported himself as a telegrapher until he had enough money to study art, and in 1869, when he was age 25, he went to the Ecole des Beaux-Arts in Paris. Returning to the U.S. in 1872, he had a hard time getting his sculpting career launched because the Beaux Arts style was not popular, and he struggled financially for several years doing commercial designs. However in 1876, a portrait bust of art dealer Daniel Cottier “turned the tide.”

From 1889-1891, he traveled in the West and Northwest and modeled the heads, which became portrait medallions, of many important Great Plains Indian Chiefs. He is credited with capturing a wide variety of facial characteristics of the Northwest Indians including Cayuse and Nez Perce chiefs and other tribal members. Some of these portrait busts are in the Indian Hall of Fame in Anadarko, Oklahoma.

Sources:
Peggy and Harold Samuels, The Illustrated Encyclopedia of Artists of the American West
Donald Martin Reynolds, Master of American Sculpture
Peter Hastings Falk, Editor, Who Was Who in American Art