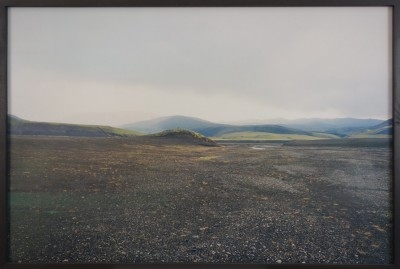 Olafur Eliasson, born in Copenhagen, Denmark, is a Danish-Icelandic artist known for sculptures and large-scale installation art employing elemental materials such as light, water, and air temperature to enhance the viewer’s experience. In 1995 he established Studio Olafur Eliasson in Berlin, a laboratory for spatial research. Eliasson represented Denmark at the 50th Venice Biennale in 2003 and later that year installed The Weather Project in the Turbine Hall of Tate Modern, London.

Eliasson has engaged in a number of projects in public space, including the intervention Green River, carried out in various cities between 1998 and 2001; the Serpentine Gallery Pavilion 2007, London, a temporary pavilion designed with the Norwegian architect Kjetil Thorsen; and The New York City Waterfalls, commissioned by Public Art Fund in 2008.

Olafur Eliasson, born in Copenhagen in 1967 to Icelandic parents, studied at the Royal Danish Academy of Fine Arts between 1989 and 1995.

In 2004 Eliasson told Berlin magazine 032c that his father was also an artist; in the same interview he also said that at one time he considered his “break-dancing” during the mid-80s to be his first artworks. In 1990, when he was awarded a travel budget by the Royal Danish Academy of Arts, Eliasson went to New York where he started working as a studio assistant. He received his degree from the Academy in 1995, after having moved in 1993 to Cologne for a year, and then to Berlin, where he has since maintained a studio. First located in a warehouse right next door to the Hamburger Bahnhof, the studio moved to a former brewery in Prenzlauer Berg in 2008.

In 1996, Eliasson started working with Einar Thorsteinn, an architect and geometry expert 25 years his senior as well as a former friend of Buckminster Fuller’s. The first piece they created called 8900054, was a stainless-steel dome 30 feet (9.1 m) wide and 7 feet (2.1 m) high, designed to be seen as if it were growing from the ground. Though the effect is an illusion, the mind has a hard time believing that the structure is not part of a much grander one developing from deep below the surface.

Thorsteinn’s knowledge of geometry and space has been integrated into Eliasson’s artistic production, often seen in his geometric lamp works as well as his pavilions, tunnels and camera obscura projects. For many projects, the artist works collaboratively with specialists in various fields, among them the architects Thorsteinn and Sebastian Behmann (both of whom have been frequent collaborators), author Svend Åge Madsen (The Blind Pavilion), landscape architect Gunther Vogt (The Mediated Motion), and architect Kjetil Thorsen (Serpentine Gallery Pavilion, 2007). Today, Studio Olafur Eliasson is a laboratory for spatial research that employs a team of circa 30 architects, engineers, craftsmen, and assistants who work together to conceptualize, test, engineer, and construct installations, sculptures, large-scale projects, and commissions.

EXHIBITIONS:
Eliasson had his first solo show in Cologne in 1993, before moving to Berlin in 1994.[10] In 1996, Eliasson had his first show in the United States at Tanya Bonakdar Gallery. The San Francisco Museum of Modern Art (SFMOMA) organized Eliasson’s first major survey in the United States Take Your Time: Olafur Eliasson, on view from September 8, 2007 to February 24, 2008. Curated by Madeleine Grynsztejn (then Elise S. Haas Senior Curator of Painting and Sculpture at SFMOMA), in close collaboration with the artist, the major survey spanned the artist’s career from 1993 and 2007. The exhibit included site-specific installations, large-scale immersive environments, freestanding sculpture, photography, and special commissions seen through a succession of interconnected rooms and corridors. The museum’s skylight bridge was turned into an installation titled One-way colour tunnel.

The Spiral Pavilion, conceived in 1999 for the Venice Biennial and today on display at Kunsthalle Bielefeld, brought Olafur Eliasson the Benesse Prize by the Benesse Corporation. In 2007, Eliasson won the first Joan Miró Prize by the Joan Miró Foundation.