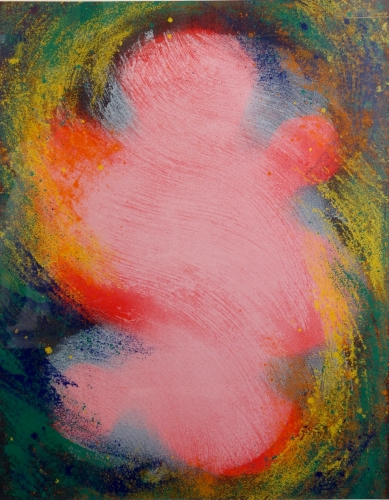 Natvar Bhavsar was born in 1934 in Gothava in the state of Gujarat in India. In 1958 Bhavsar earned a master’s degree in art at the CN School of Art in Ahmedabad, India. In 1959 he was awarded a government diploma in art and in 1960 he earned a BA in English literature from Gujarat University. In 1962 he enrolled for one semester at the Philadelphia College of Art; he then enrolled in the Tyler School of Art also in Philadelphia. He attended the graduate school of art at the University of Pennsylvania.

Although Bhavsar first developed skills as a realist painter, by the time he was in Philadelphia he had become an abstract painter. He was influenced by Robert Motherwell, David Smith and Barnett Newman whom he met as a student at the University of Pennsylvania. Bhavsar was also strongly motivated to abandon his past techniques and embrace American abstract painting when he viewed an exhibit by Clyfford Still.

In 1965 the painter earned a MFA from the University of Pennsylvania and was then awarded a Rockefeller Fellowship. Bhavsar moved to New York and began teaching at the University of Rhode Island. In 1968 he moved to the Soho district in New York. Within a few years he was exhibiting at solo and group shows in New York.

Although influenced by the color field movement and paint pouring methods of Frankenthaler and Morris Louis as well as the art of Pollock, Bhavsar invented a process all his own. Bhavsar soaks canvas with clear liquid binder and then sifts a layer of powdery pigment onto the canvas repeating the process as necessary.