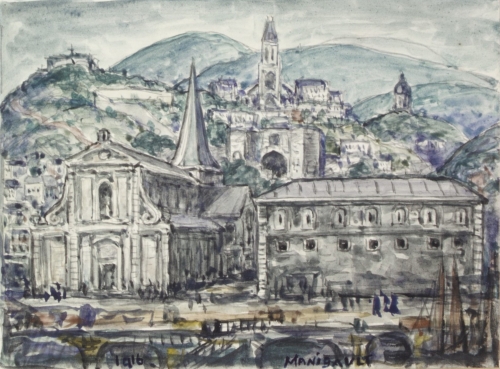 Driven by an intensely experimental nature, Edward Middleton Manigault explored the parameters of Realism, Post-Impressionism, Symbolism, and Cubism. In addition to painting, he proved to be a talented craftsman who produced ceramics, picture frames, carved wood constructions and furniture. Unlike other artists of the period whose reputations rested on a signature style, Manigault created a diverse body of work in a range of styles that reflected his visionary approach to the aesthetics of modernism. His artistic development parallels the trajectory of early American modernism and exemplifies its innovative, searching spirit.

Manigault was born in London, Ontario, on June 14, 1887, into a prominent London family. In search of formal art training, he moved to New York City in 1905 and enrolled in classes at the New York School of Art. He studied under Robert Henri, the leader of the American Realists, and Kenneth Hayes Miller, who would remain a lifelong friend and enthusiastic champion of Manigault’s work.

The dark palette of Manigault’s early paintings clearly reflects Robert Henri’s influence. These works also shared the hazy, romantic and symbolic subjects found in Miller’s work. Early in his career Manigault concentrated on depicting effects of light, time of day, and atmosphere. Under Henri’s influence, and along with his friend George Bellows, Manigault took to the streets and portrayed the rivers and parks of the city.

Manigault made a dramatic shift away from Realism by 1909 and began producing paintings in the spirit of Post-Impressionism. During next two years, which were among the most productive of his career, Manigault honed an independent style that resulted in a number of dramatic, imaginative compositions. Manigault exhibited some of them at the Haas Gallery in New York, where he had three solo shows from 1909 through 1911. Infused with Fauve chromatics, many of Manigault’s compositions at this time were created with a technique related to pointillism in which the artist juxtaposed bold patches of color to create mosaic-like effects. These energetic, vibrant paintings also drew upon decorative aspects of Eastern art.

Manigault continued to refine his modernist style and build upon qualities of Eastern art in the pictures he created around 1911. However, a palette of more somber, muted tones replaced the bright palette he had previously favored. In addition, Manigault had become far more focused on overall decorative patterning. During this period Manigault also created low-toned Symbolist-inspired paintings. His visionary landscapes populated by nudes bear a resemblance to those of Arthur B. Davies, an artist with whom Manigault was undoubtedly familiar.

Manigault’s pilgrimage to Europe in 1912 reinforced his attraction to Symbolist subjects. He remained abroad, traveling in France and England, from June to September of that year. Manigault had not gone to train under a specific master or to study in any particular school. Rather, he spent time visiting museums and galleries where he could make copies of works by the old masters and see the work of Cézanne and other modern masters. During his travels, Manigault painted extensively in watercolor and renewed his earlier interest in architectural scenes and landscapes.

After returning from Europe, Manigault began regularly exhibiting his paintings. In 1913 Manigault had his first solo show at the Charles Daniel Gallery in New York. His association with this establishment endured for several years. 1915 marked a radical change in Manigault’s career. He married Gertrude Buffington Phillips (1886-1958) and shortly thereafter volunteered as an ambulance driver in the World War I. Manigault’s artistic output ceased while he was at the front. After only five months he was declared “incapacitated” and discharged from service.

Manigault’s war experiences precipitated a serious nervous breakdown and made returning to art an extremely difficult task. He produced only four paintings in 1916. When Manigault regrouped, he made numerous war-related paintings, most of which are now unlocated. The only known extant image directly pertaining to his military experiences is Vorticist Landscape (War Impression) (c. 1916, Curtis Galleries, Minneapolis, Minnesota) a distinctive painting that expresses the tumultuous conditions of war.

During the postwar years, Manigault worked in a wide range of styles. He was inspired by the example of American modernists including William and Marguerite Zorach, each of whom painted flat, compressed, and highly patterned compositions. Manigault also spent considerable time in upstate New York, immersed in the utopian society of the Oneida Community. Manigault also painted intensely colored still life arrangements that showcase his masterful handling of richly patterned decorative subjects. These arrangements, inspired by Oriental motifs, typically featured ceramic vases and plates that Manigault may have created during his sojourn with the Oneida Community.

In 1919 Manigault resettled in Los Angeles, California, and underwent a period of artistic renewal. He pursued craft work and produced interior design pieces, including decorative furniture, screens, and moldings. He also painted flower still lifes and landscapes, works that drew upon Cézanne’s and Renoir’s language of form and color. Manigault navigated new terrain between color and spatial relationships, and his late work displayed his awareness of the modernist innovations of Synchromists Stanton MacDonald-Wright and Morgan Russell.

Shortly before Manigault starved himself to death in 1922, he destroyed approximately 200 of his paintings during periods of depression and hysteria. His remaining works are invaluable documents that highlight the artist’s contribution to American modernism.