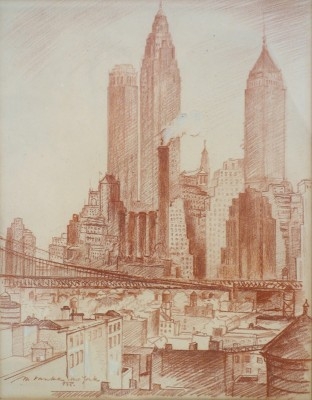 Vanka was born in Zagreb in 1889. He was sent to live with peasants, but at the age of eight was discovered by his maternal grandfather and sent to live in a castle. He studied art in Zagreb, Croatia and Brussels, Belgium. During World War I, he served with the Belgian Red Cross, because he was a pacifist and would not serve in the regular army. Until 1934 he lived in Zagreb, Croatia, where he was a professor of painting at the Academy of fine Arts; In 1934 came to the U.S., lived in New York City. Vanka was naturalized as an American citizen in 1940. In 1941 moved to Rushland, PA, Bucks County, lived there until his death.

He painted landscapes, portraits, folklore compositions, etc. His style ranges from impressionistic landscapes, still-lifes to expressionistic compositions.He taught art in Zagreb, but went to America in 1935 with his wife, Margaret Stetten Vanka, and their daughter, Peggy.

Vanka’s most important works are his Millvale Murals in the St. Nicholas Croatian Catholic Church, the first Croatian Catholic parish in the United States, in Millvale, Pennsylvania, which depict Christ and Mary in images of war and offer social commentary on world events like fascism, war, and poverty. Murals painted in 1937 depict Croatian immigrants coming to America to seek a better life, grateful to have escaped the slaughter taking place in their homeland. This was Vanka’s “Mothers offer up their sons for labor” theme, a tribute to all those who worked diligently in the mills and mines in and around Pittsburgh. One mural depicts the fire and collapse of one of the coal burning mills and as a Croatian mother cradles her dead son, her other three sons rush into the mill to save their fellow workers and are killed. A committed pacifist, the intensity of Vanka’s beliefs are depicted clearly in post-war murals. One is of the Virgin Mary coming between two warring soldiers. Another depicts two soldiers battling each other, yet this time it is Jesus who attempts to intercede and one of the soldiers accidentally thrusts his bayonet into Jesus’ heart.

Vanka was memorialized in Gift to America, a play written in 1981 by Professor David P. Demarest of Carnegie Mellon University. Vanka taught art at a community college in Bucks County, Pennsylvania at the end of his life. He died swimming off the coast of Puerto Vallarta in 1963.

In 1968, Vanka’s widow and daughter donated 47 of his works to the Croatian Academy of Sciences and Arts.

On Easter Sunday 2012 the Pittsburgh-based band Action Camp released a short film setting one of their live performances of a musical suite against the Maxo Vanka murals that inspired it. This is one of only two performances of this work, that was performed in front of the Millvale Murals in the St. Nicholas Croatian Catholic Church. The band was commissioned to perform this suite in a collaboration called Hi-Rez.