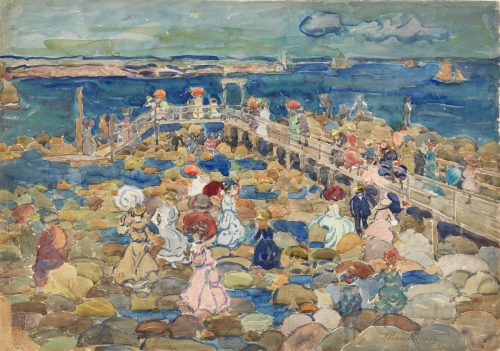 Born in 1858 in St. Johns, Newfoundland, Maurice Prendergast grew up in Boston, where he completed high school at age fourteen and went to work for Loring and Waterhouse, a dry goods firm. He later worked lettering posters. Prendergast did not receive formal art schooling until he was in his early thirties, when he went to Paris and enrolled in the académies Julian and Colarossi. During his three years abroad, Prendergast’s emerging style was influenced by Japanese prints, Art Nouveau, and the art of James McNeill Whistler and the Nabis artists Pierre Bonnard, Edouard Vuillard and Maurice Denis. He was also influenced by the circle of Anglo-American artists that congregated at the “Chat Blanc” cafe.

By 1896 Prendergast was exhibiting regularly in Boston and other cities and his art was selling well. In 1898 he made an extensive tour of Italy, visiting Venice, Siena, Florence, Orvieto, Padua, Rome, Naples and Capri. At this time, his work became more complex and spatially integrated. Prendergast returned to Boston amidst increasing recognition and acclaim. In 1900 he was given a one-man show at the Macbeth Galleries in New York. This success was followed by a bronze medal in the 1901 Pan-American Exposition in Buffalo, New York, and successful exhibitions at the Detroit and Cincinnati art museums.

Prendergast was initially an urban genre painter. His concentration on leisure activities of the middle-class in public spaces reflected the interests of his patrons, as well as the influence of French Impressionist artists Claude Monet and Edgar Degas. His signature theme was the crowd, and his figures are anonymous: Each individual is engaged in a specific activity within the context of the group. In contrast to the anecdotal viewpoints of his American contemporaries John Sloan and William Glackens, Prendergast’s remote, disengaged viewpoint displays a closer affinity with the French Impressionists. Prendergast’s colorful paintings have a mosaic- or tapestry-like quality related to the pointillist style developed by Georges Seurat. They present flat, bold areas of color combined with a compression of perspective and scale.

Prendergast’s official affiliation with The Eight began when he exhibited his work in the group’s inaugural exhibition in 1908. Consequently, he became involved in organizing the famous Armory Show of 1913, an event that played a major role in introducing modern art to American viewers and patrons and enhanced Prendergast’s own stature as an artist. Following the Armory Show, he was persuaded by friends and colleagues to move to New York City. He was elected President of the American Association of Painters and Sculptors in 1914 and settled into a highly productive and lucrative period. Prendergast emerged as a significant figure in American modernism as his work shifted from Fauvism into increased formalism, culminating in a semiabstract style. The artist died in New York City on February 1, 1924.