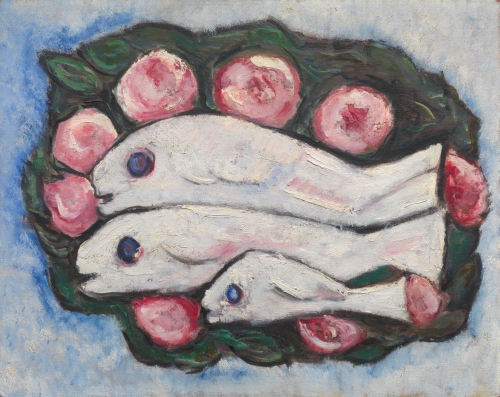 A leading practitioner of American modernism, Marsden Hartley created some of the most uniquely powerful modernist expressions by any American artist. Hartley (who was baptized Edmund Hartley) was born on January 4, l877, in Lewiston, Maine, to working class English immigrant parents. His bleak childhood was lightened by the family’s relocation to Cleveland, Ohio, a move that gave the young man the opportunity to attend the Cleveland School of Art. In 1896, Hartley took private art lessons with John Semon, a follower of the French Barbizon School. In the summer of 1898, he enrolled in an out-of-doors painting class conducted by Cullen Yates, a local, Paris-trained Impressionist. At the end of the summer session, Yates held an exhibition of his students’ work. One of Hartley’s works caught the attention of a trustee of the Cleveland School of Art, who helped secure a scholarship to the school for the young artist. Other members of the school community also encouraged Hartley: his drawing teacher, Nina Waldeck, instilled in him a foundation for spiritual and mystical qualities and Anne Walworth, a school trustee, provided him with a five-year stipend to study in New York.

In the fall of 1899, Hartley moved to Manhattan to further his studies in art. At first, he enrolled in William Merritt Chase’s School of Art. After one year of study with Chase, however, he transferred to the National Academy of Design, where he remained for four years. In 1902, the National Academy awarded Hartley the Suydam Silver Medal for still-life drawing. That summer, Hartley went to a retreat in Center Lovell, Maine, where he painted mountain imagery in an academic and realist style.

In 1906, in an attempt to reestablish family ties, Hartley adopted his stepmother’s maiden name, Marsden and dropped his original first name two years later. He began painting landscapes with a muted palette inspired by the American Impressionist John Henry Twachtman and the Barbizon painter George Inness. Around this time, Hartley wrote to the publisher Thomas Mosler and asked for a job. He was invited by Mosler to spend the summer of 1907 at Green Acre, a mystic/intellectual retreat in Eliot, Maine. Green Acre attracted artists, theologians, yogis, swamis, and Eastern mystics. It was here that Hartley discovered a deep appreciation for Eastern religion. Also during this time, art patron Mrs. Ole Bull, a visitor to the colony, gave Hartley his first exhibition at her home in 1907.

In 1908, Hartley moved again, first to Boston and then to Maine in the autumn of that year. He occupied an abandoned farmhouse near North Lovell and painted what he considered to be his first mature works. In North Lovell, he developed a Neo-Impressionist style, using intense color and agitated brushstrokes similar to that found in the art of Maurice Prendergast. He also began using cloud and mountain motifs-imagery that would remain central to his body of work throughout his life. Hartley also applied the stitch stroke of Swiss painter Giovanni Segantini in his Maine seascapes. He showed these paintings to Prendergast who wrote to William Glackens in New York, inducing Glackens to show these works to his fellow artists of The Eight.

In 1909, Hartley was introduced to Alfred Stieglitz, a meeting that would change his life forever and place him firmly within the progressive art circles of the time. Stieglitz immediately arranged a one-man exhibition for Hartley at his gallery “291.” A year later, in 1910, Stieglitz included work by Hartley in Younger American Painters, another exhibition organized at 291. Inspired by Max Weber, who championed Paul Cézanne, as well as by a visit to the Havemeyer Collection in 1911, Hartley painted a series of still lifes that combined an emphasis on structural form with decorative elements and the brilliant colors he found appealing in the art of Matisse.

Beginning in 1912, Stieglitz financed several European excursions for the artist. During the first, 1912, sojourn, Hartley visited Gertrude and Leo Steins’ famous salon, which provided him with a unique opportunity to meet important vanguard artists and writers and become intimately familiar with new works by Matisse, Cézanne, and Picasso. This exposure to advanced European art at the Steins’ home had a decisive impact on Hartley and inspired him to create paintings in a high-key, Fauve palette with flattened, heavily outlined forms in a cubist mode.

In May of 1913, Hartley left Paris for Germany and embarked on what is generally referred to in the scholarship as his first Berlin period. During this critical time in his artistic development, Hartley became friendly with Wassily Kandinsky and Franz Marc, two influential artists who led Hartley to realize fully the importance of embracing spiritual values in painting. Hartley was given a solo show at the Galerie Goltz in 1913 and also exhibited Five Intuitive Abstractions at the prestigious Herbstsalon the same year. His works had the distinction of being displayed alongside those by Kandinsky and Henri Rousseau.

Hartley returned to America in November 1913.

In 1914, he had his third one-man show at Stieglitz’s 291, and in the spring he departed for Germany for his second extended trip. During his second Berlin period, he worked on a group of symbolic still lifes and painted a series of German military works-known as the German Officer portraits. Hartley used symbolic objects in these paintings to represent psychic and physical characteristics of the subjects he portrayed. Finding that the conditions in Germany had grown increasingly intolerable during the war, Hartley left Berlin, the city closest to his heart, in December of 1915.

Hartley’s transition back to New York was a difficult one, particularly because anti-German sentiment was at a peak there, and Hartley had a very strong allegiance to all things German. In 1916, Hartley executed a series of paintings called Movements and contributed to the Forum Exhibition, which was hosted by the Anderson Gallery. He spent the summer in Provincetown where he painted abstract and semi-abstract, Cubist-oriented compositions of angular, flat planes with light colors. During this time, Hartley was also actively engaged in writing poetry for the journals Others and Poetry. In the winter of 1916-1917, he traveled to Bermuda where Charles Demuth joined him for several months. It was at this time that Hartley shifted from an interest in avant-garde issues towards working in a more representational mode. Late in October 1918, Hartley moved to Santa Fe and then to California where he became involved with the literary community there. In 1919, he returned to New York.

Hartley led a peripatetic life, and in keeping with his searching, restless spirit, he traveled again to Europe in 1921. He began in Paris before venturing on to his beloved city of Berlin, which he then described as being “under cubist influence.” Hartley, who remained in Berlin for two years, had secured the financial means to travel abroad by using the proceeds of a 1921 auction of his work, one organized by Stieglitz and Mitchell Kennerly of the Anderson Gallery. In August 1925, Hartley moved on to the south of France, where he painted for next three or four years.

Despite feeling like an outsider in his native land, Hartley once again set up residence in the United States in 1930. He exhibited his work to positive critical reception and enjoyed several sales from an exhibition that Stieglitz provided for him in December of that year. In 1930, he worked for a time in Sugar Hill, New Hampshire where he executed paintings that document his fascination with the mountainous landscape of that region. In 1931, he painted in Dogtown Common, an area outside of Gloucester, Massachusetts. His Dogtown works, as they are commonly called, are distinguished by their emphasis on sculptural qualities and stark monumentality. In Dogtown, Hartley immersed himself in mystical and metaphysical literature and painted with a new optimism and energy. He attempted to clarify and simplify his art and his life goals.

A Guggenheim travel grant, which Hartley received in 1931, provided him with one year’s support to work outside of the country; Hartley chose to go to Mexico. During his Mexican interlude, Hartley nurtured his fascination with pre-Columbian culture and painted works inspired by the country’s native past and infused with a new, spiritually symbolic significance. Hartley’s year in Mexico proved to be a vitally important chapter in his career; for it was there that he attained a true connection with his mystical and spiritual roots. This resulted in some of his most powerful paintings. Through his Mexican works, Hartley reached an important bridge between his Maine and Berlin periods.

Hartley moved frequently between 1933 and 1937, from Bavaria to Dogtown and from Bermuda to Nova Scotia. In 1936, Stieglitz gave Hartley a one-person exhibition and one year later Hartley had his final solo show at Stieglitz’s gallery (by then renamed An American Place). In 1937, Hudson Walker became Hartley’s new dealer and by 1938, Walker was already hosting several one-man shows of Hartley’s work at his New York gallery. That same year, Hartley summered in Maine and started a series of portraits of Nova Scotia people. These were primarily images of men painted with an emphasis on frontality and directness. Hartley’s devotion to figure painting proved to be a critical success.

In 1939, Hartley lived and worked in Portland, West Brookville, and Bangor, Maine. In October of 1939, he climbed Mount Katahdin and afterwards began a series of paintings based on this subject. He continued work on these paintings for the next three years. In 1940, Hartley executed a series of figure paintings that were based on sunbathers and lobstermen, as well as a group of religious subjects and Maine landscapes. Hartley’s work was taken up in 1941 by the Macbeth Gallery in New York. Around this time, he began to devote much of his attention to his poems and essays and also focused on painting still lifes with monochromatic or seascape backgrounds. In 1942, the dealer Paul Rosenberg began to represent Hartley.

Hartley’s last years were plagued by hearing loss, failing eyesight, and poor health in general. He was quite ill and isolated the last twelve years of his life and died from terminal heart failure in Ellsworth, Maine, on September 2, 1943.