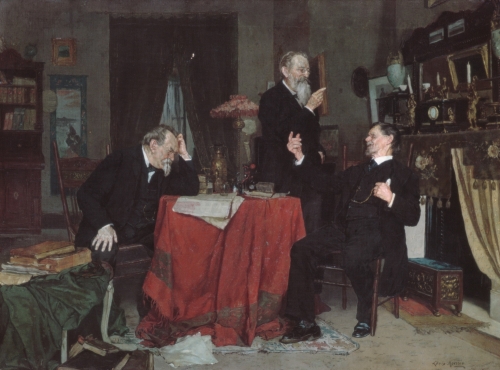 A native of New York, he became one of America’s foremost anecdotal genre painters in the late 19th and early 20th centuries. A favorite subject was distinguished elderly men going about everyday activities in gentile interior settings that reflected Victorian tastes.

He was the son of a decorative painter and was initially taught by his father and then attended classes at the National Academy of Design. For six years, he studied in Munich with Frank Duveneck, Ludwig Lofftz, and Feodor Dietz and during this period was part of a group of American artists emulating 17th century Dutch masters.

Returning to New York, he opened a studio and did decorative painting while developing the genre style for which he is known. He earned the National Academy’s Hallgarten Prize for a small painting entitled “Puzzled” and was made an Associate Member.