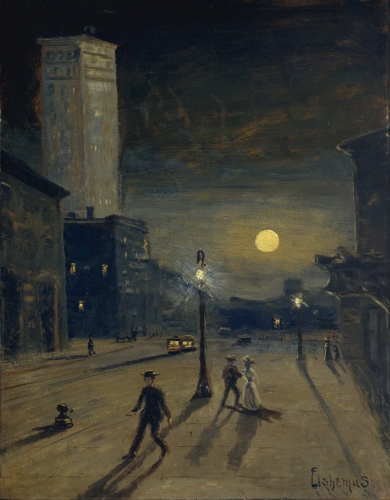 Born near Newark, New Jersey, Louis Eilshemius was an eccentric artist with a vision of his own that conformed to no school or tradition of painting. He referred to himself as the “Grand Parnassian and Transcendental Eagle of the Arts” (Falk).

He lived in Europe from 1873 to 1881, attended Cornell University and the Art Students League in New York, and from 1886 to 1887, the Academie Julian in Paris. In 1888, he settled permanently in New York City but traveled to Europe and North Africa. In 1894, he went to California and returned through Arizona, painting in Yuma, something he returned to do in 1901, likely his last Arizona visit.

He began as an Impressionist, obviously influenced by Edgar Degas, but his work changed according to Matthew Baigell and ignored “the logic of time, place, and even gravity” (Dictionary of American Art). Ignored by the public, his work became increasingly private, simplified, and horrific in subject matter. Lacking attention, he became defensive, declaring himself to be a superior genius and the mightiest intellect in the world. In 1921, he stopped painting, but in the 1930s interest in his painting was aroused.