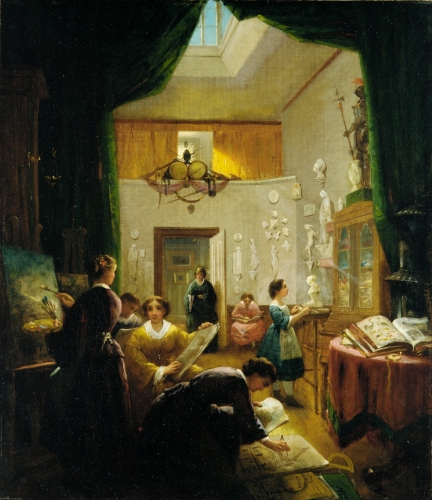 He came from an artistic family, his father being a history painter. Combining this heritage with his own native talents, he was producing successful pastels at age sixteen. Lang studied in Stuttgart, Germany and Paris, France, before coming to the United States in 1838. He first settled in Philadelphia, then lived in Italy from 1841-1845, before returning to America (1847) and living the majority of his life in New York City, with frequent visits to Europe.

During the Civil War, Lang was working in the well-known artistic landmark, the Tenth Street Studio Building, in New York City. John F. Kensett and Emanuel Leutze were other artists there at the time.

Lang was a member of the Artists’ Fund Society, and the National Academy of Design, New York City, one of his exhibition venues. He was elected an Associate there in 1850, and an Academician in 1852.

Sources include: Groce and Wallace, The New York Historical Society’s Dictionary of Artists in America