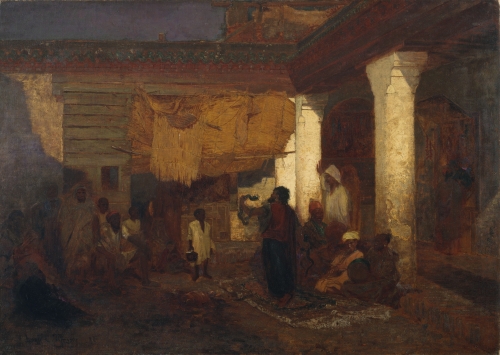 Born in New York City to the founder of Tiffany & Co., the famous jewelry store, Louis Comfort Tiffany became known for his designs of richly colored works of glass in the Art Nouveau style. However, he expressed no interest in the family business and focused on his own painting talents, starting as a creator of landscapes, still lifes, and genre scenes, working in both oil and watercolor.

He studied painting with landscapist George Inness, who gave him much encouragement. With an interest in Islamic and art of the Far East, inspired by Tiffany & Company’s chief designer, Edward Moore, Tiffany studied in Paris with Leon Bally, a specialist in Middle Eastern subjects. This education combined with an 1869 visit to Spain and North Africa with artist Samuel Colman stirred a life-long interest in strong color. On this trip, Colman encouraged Tiffany to make watercolor sketches for later conversion into paintings. In 1874, Tiffany returned to Europe, spending much time in Brittany.

Throughout the 1870s, he exhibited his paintings widely, and in 1877, became one of the secessionist artists that included John La Farge and Augustus Saint-Gaudens who rebelled against the staid National Academy of Design and formed the Society of American Artists. By 1875, he had begun to work with stained glass for which he is primarily known, and he developed a method of shaping glass in its molten state, allowing him to create a mosaic effect. In 1879, he focused on interior design and with Colman and others formed Louis C Tiffany and Associated Artists, a collaboration underlying the famous Tiffany glass designs that included the signature Tiffany leaded-glass lamp shades.

However, he did not completely forsake painting, and in 1886 (on his honeymoon), 1916, and 1917, he traveled West where he visited Yellowstone National Park, which resulted in dramatic landscape paintings. He also visited the Orient where he focused again on dramatic and exotic aspects of the landscape.

At his home at Oyster Bay, Long Island, he established the Louis Comfort Tiffany Foundation for aspiring young artists and craftsmen. Ultimately, this location became the repository for his art collections.