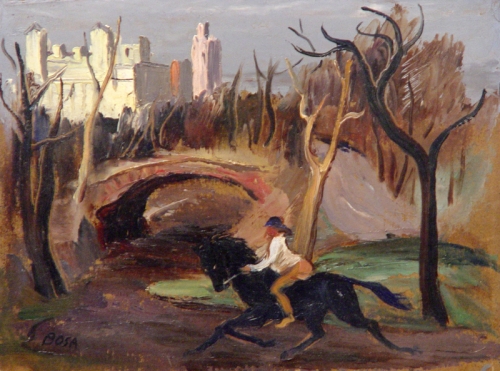 Born in a small town near Venice, Italy, Louis Bosa became a genre, figure, and landscape painter who exhibited widely, and was also a much-respected art teacher. Amidst the growing trends of modernism, especially Abstract Expressionism, he kept to his own unique style of apolitical, witty character studies and subjects of humor and human pathos. For art historians, his work has been difficult to categorize, which has led to him getting less attention than many of his contemporaries, especially those who had sophisticated public-relations machines. Also, he was such a unique character—ever telling jokes and far-fetched stories—that the focus on him tended to be on his quirky personality rather than the seriousness of his art.

Bosa showed early art talent and interest, and began to do figure paintings, using his family as models, by the age of ten. When he was fifteen years old, he enrolled in Venice at the Academia delle Belle Arti, and between 1923 and 1924, emigrated to Hamilton, Canada where a brother had preceded him and was working in a steel mill.

However, not wanting to become a steel worker as his family was urging him to do, Louis Bosa moved to Buffalo, New York to join an aunt and uncle. There he met his future wife, Theresa Krakowska, and shortly after moved to New York City to pursue art studies. He took various odd jobs to support himself, and began to do fine-art painting regularly, fortified by his studies at the Art Students League whose Director was the Social-Realist painter John Sloan. Sloan’s painting style and subject matter had an ongoing influence on Bosa.

In 1926, Bosa and Theresa married. The couple struggled financially through the 1930s and early 1940s, and many of his paintings reflect laboring people or obvious “down and outs” wandering streets or just standing idle.

A big boost came in 1944 when he won a $1500. prize for painting from the Pepsi-Cola Company. He also made product endorsements such as for Grumbacher paints. In 1938, he won the first award that brought him much attention, the John Wanamaker Prize at an outdoor exhibition in Washington Square. He was awarded the Altman Prize at the National Academy of Design, but that was withdrawn when it was discovered that he was not American born.

In the 1930s, the Bosa purchased a dilapidated cabin, built 1730, in Bucks County, Pennsylvania, and the cabin, named Casa Bosa, was their summer home for many years and after retirement, their permanent home. In an addition to the original structure, Bosa created a room resembling a chapel in which he housed small sculptures that he had made and Renaissance religious sculptures that he had collected.

The Bosas also did much entertaining at Casa Bosa, including students from his classes in New York and Cleveland.

From 1944 to 1946, he was an instructor at the Art Students League in New York City and from 1943 to 1946, he taught at the Cape Ann School at Rockport, Massachusetts. In 1960, he was an Instructor of Advanced Painting at Cleveland Institute of Art 1959.

In New York, Bosa exhibited at The Kleeman Galleries and the Milch Galleries, and in 1951, Louis Bosa accepted an assignment from Life magazine to visit his hometown of Codroipo, Italy, a village near Venice, and to do paintings of local people. He had not been there for 27 years, and townspeople there were impressed with him as a successful artist. He did more than thirty depictions of family members including his mother and father and ninety-five year old grandmother. His mother died shortly after that visit, and unable to return for her funeral, he did a painting called Procession, which had figures of people he knew would be in attendance including himself as an observer peering from a window.

Louis Bosa died in Doylestown, Pennsylvania on October 19, 1981 at age 76. He had cancer of the bladder, and suffered dementia from anesthesia during surgery in 1975, which meant he did little painting the last years of his life.