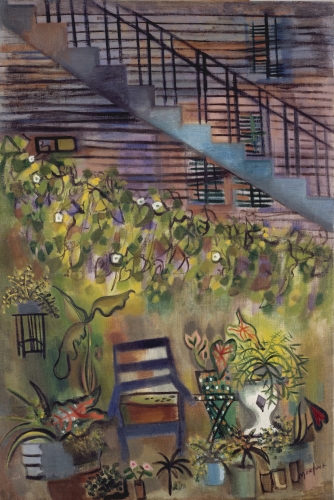 A painter of semi-abstract canvases, Loren MacIver was raised in New York City where she took her only formal art training at age 10 at the Art Students’ League.

She traveled in Europe but lived most of her life in Greenwich Village, painting dreamlike, half-abstract landscapes. In 1929, she married Lloyd Frankenberg, a poet, and they collaborated with their work. In 1935, her husband, without her knowledge, showed her paintings to Alfred Barr, Director of the Museum of Modern Art. He bought one of her paintings, and this attention launched her art career.

She painted in Provincetown from 1930 to 1938. Her first one-person show was in 1938. She worked for three years on the WPA Federal Art Project and continued to have New York Gallery representations. In 1997, a retrospective of her painting was held at the Tibor de Nagy Gallery in New York.

MacIver was also a magazine illustrator whose commissions included “Fortune”, and “Town and Country”.

Source:
“American Women Artists” by Charlotte Streifer Rubinstein
“Who Was Who in American Art” by Peter Falk