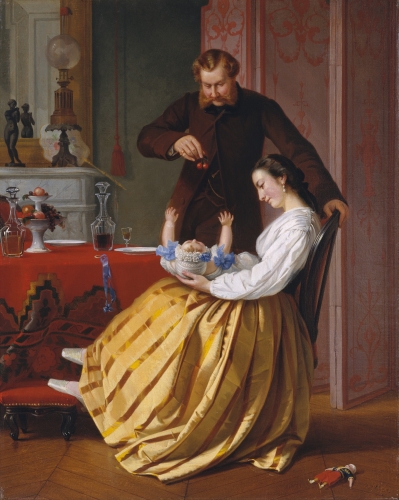 Lilly Martin Spencer was one of the foremost genre* painters of the late 19th century during a time called the Golden Age for the apparent material excesses of the upper classes. In addition to her successful career, she bore thirteen children and supported the seven who survived plus her husband with the income from her work.

Her paintings of everyday life, considered sentimental subjects by some viewers, were widely reproduced in engravings and lithographs. She became one of the most popular artists of that time and equaled in price and public appreciation the genre painting of George Caleb Bingham.

She was from Marietta, Ohio, and was encouraged in her education by liberal-minded parents, who had emigrated to the United States in 1830 with the goal of forming a utopian community. Their were exceedingly active in promoting abolition, women’s rights, and temperance. Lilly’s father was so supportive of her desire to get art training that he left home for a period of time to be with her in Cincinnati while she studied.

During her childhood, she was educated at home from an extensive classical library, and she showed early art talent. At age seventeen, she painted charcoal murals including life-size portraits of family members throughout the home as well as scenes from their family life. This unusual home decoration brought many viewers from surrounding areas.

In 1841, Spencer had her first exhibit, held in a local church, and the admission fee of twenty-five cents went towards her education. The exhibition brought so much positive reaction that Nicholas Longworth, local philanthropist, offered to finance her education in Boston and Europe, but for unknown reasons, she refused the offer.

She studied with local teachers, but outgrow their instruction and expressed confidence that she would surpass the limitations of Cincinnati portrait painters. Much of her early success came from the sale of engravings of her paintings for five dollars by the Western Art Union of Cincinnati in a lottery whose winner got an original oil painting by her. Eventually this promotion was declared illegal.

In 1844, she married Benjamin Rush Spencer, and they had a forty-six year marriage in which he carried the burden of the domestic chores, recognizing the demands of his wife’s talents. In 1848, they moved to New York City, and she felt inferior among the numerous academically trained artists. She continued to paint all day and took classes at the National Academy of Design*. Many of her domestic scenes had her family as models.

In 1854, the Cosmopolitan Art Association began the promotion of her work through lithographs* and engravings*, and this endeavor made her famous but she got little money. For years, she and her husband struggled to support their family and never achieved financial security. She lived to the age of eighty, continuing to paint to the end of her life.