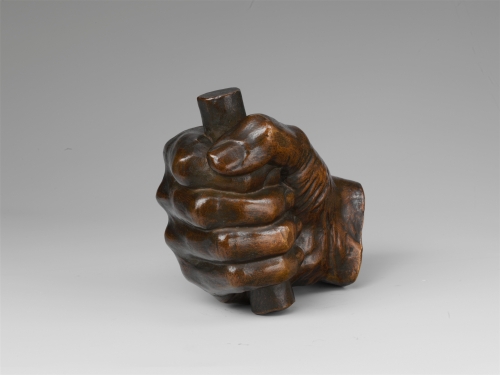 Leonard Wells Volk, sculptor, was born November 7, 1828 at Wellstown (now Wells, NY) to Garret and Elizabeth (Gesner) and died August 19, 1895 at Osceola, WI (on a summer visit). At age 16, he began learning marble cutting from his father and elder brother in Pittsfield, Massachusetts. After working several years in Bethany, Batavia and Buffalo, NY, he studied drawing and modeling in St. Louis.

On April 22, 1852 he married Emily Clarissa Barlow, daughter of Dr. Jonathan King Barlow. They had four children-Adele, Arthur, Nora and Stephen A. Douglas Volk. They first settled in Galena, Illinois, then went to St. Louis and finally settled in Rock Island, Illinois where he worked at Volk’s Rock Island Marble Works with his brother.

In September, 1855, he went to Europe with the financial help of Stephen A. Douglas (his wife’s cousin), after taking Emily to Pittsfield, Massachusetts, where she stayed with Abram and Matilda. On his return from Europe in 1857, Volk opened a studio in Chicago where he lived the rest of his life.

His first work was a bust of Stephen A. Douglas. The sculptor was formally introduced to Lincoln in 1858 and preliminary arrangements were made for Lincoln to sit for a bust during a future visit to Chicago. In March of 1860, Lincoln finally sat for Volk. Volk was the only sculptor to make a life mask of Lincoln (The Smithsonian Institute has the original life mask) and several months later a cast of Lincoln’s hands. The bust served as a model for numerous sculptors who created their own portraits of Lincoln.

Volk enlisted in the Army in Colonel John Van Arnam’s regiment as a private, but the national quota was filled and his unit disbanded.

His most famous works are his statues of Stephen Douglas and Abraham Lincoln, but also prominent men such as General James Shields, Elihu B. Washburne, Illinois congressman, David Davis, Lincoln’s friend and advisor, Leonard Swett, Lincoln’s political associate; J. Young Scammon, Chicago journalist; and Leslie E. Keeley, doctor who developed a cure for alcoholism was captured for posterity by Volk.

Some of his most famous projects were the statue of Lincoln for the Illinois Statehouse (1876), a military memorial in Rochester, NY, the Rock Island County Soldiers’ Monument (1869). Volk was very instrumental in promoting art in Chicago.