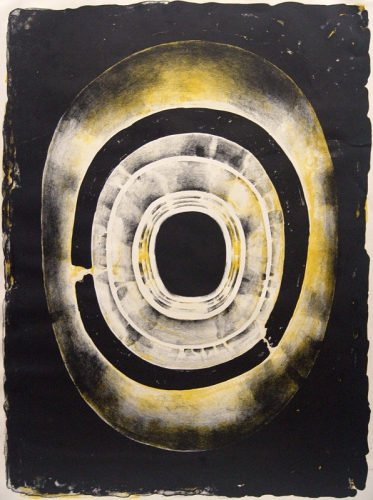 One of America’s most individualist artists, Lee Bontecou is best known as pioneering the technique of shaped canvas, creating works that were a combination of painting and sculpture. Many of her wall pieces have centrally located gaping holes that are menacing and give one the impression of staring deep into the cornea of an eye or into the recesses of the earth. Lee Bontecou seldom titles her work, letting them speak for themselves.

Lee Bontecou was born in Providence, Rhode Island and studied at Bradford Junior College and later at the Art Students League in New York City from 1952 to 1955 with John Hovannes and William Zorach. At the age of twenty-six, she traveled for two years in Italy and Greece on a Fulbright Scholarship, and in 1959, Lee Bontecou was the recipient of a Tiffany Foundation Grant.

In the late 1950′s, her pencil and chalk drawings were of fanciful birds, animals, and insects and she constructed large bizarre sculptures of plaster and terra cotta. In the 1960′s, Lee Bontecou began her box-like wall reliefs using industrial materials of screen, pipe, burlap, canvas and wire. In the 1970′s, her exhibits became quite macabre with fish of molded translucent plastic and threatening nine-foot flowers. In the 1980′s, Lee Bontecou focused on hybrid wall art that was not quite painting and not quite sculpture, but it was square in shape and usually protruding towards the viewer. Invariably they contained elements that were surprising and startling.

Her technique usually involves welding to form a variety of space divisions and projections and she combines all sorts of found materials such material from old mailbags, laundry bags and war surplus canvas. Lee Bontecou cuts them to size and uses the fabric to fill in divided spaces. Sometimes she will scorch the entire work with blow-torch flames to achieve blackness and subtle gradations of color. The holes or openings of many of Lee Bontecou’s pieces often contain metal grills, gnashing teeth, zippers or other surprises often suggesting violence.